1st Lady of Star Trek, Majel Barrett Roddenberry, Died Today! December 19, 2008
Gene Roddenberry's wife, the queen of the Star Trek empire, has suddenly died!
She is now with Gene, Scotty and McCoy in the 23rd century. 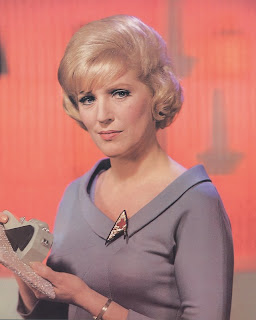 Majel Barrett Roddenberry, who was involved with Star Trek since the beginning died of leukemia early this morning in her Bel Air home. "Even before she married Star Trek creator Gene Roddenberry in 1969, she was integral to Star Trek," "She was the original first officer aboard the Enterprise—replaced after the pilot by Leonard Nimoy's Mr. Spock—and reappeared as the faithful Nurse Christine Chapel." The 76-year-old continued her Trek with the Sci-Fi brand until the very end, even recording voiceover as the ship's computer for J.J. Abrams movie "Star Trek" two weeks ago. It was one of roles she used to do through her more than four decades of work on the show. Rest in Peace.
Posted by The Man at 12/20/2008