The Audacity Of Dope 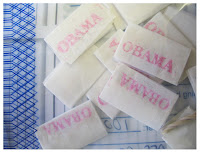 New York dealers sold heroin branded with president's name
Add heroin to the scores of products that have been branded with President Barack Obama's name. Cops in upstate New York this week broke up a drug ring that allegedly sold heroin under several brand names, including "Obama." As seen in Sullivan County Sheriff's Office photos, the president's surname was stamped in red ink on small glassine wrappers that were peddled by street dealers. Investigators arrested five suspects for their alleged roles in the narcotics distribution activity. The branding of illicit drugs is a favorite of pushers, who have previously sold bin Laden heroin, Harry Potter Ecstasy, bricks of Teletubbies cocaine, and green-tinted crack in recognition of St. Patrick's Day.
.