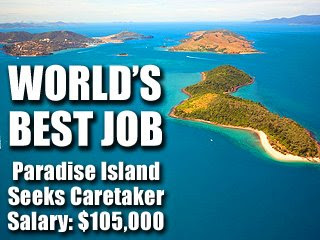 Position: Island caretaker. Duties: Lazing around Australia's Great Barrier Reef for six months. Salary: $105,000.
Unemployed, take heart — the aforementioned job ad is for real. Billing it the "Best Job in the World," the tourism department in Australia's Queensland state on Tuesday said it was seeking one lucky person to spend half a year relaxing on Hamilton Island, part of the country's Whitsunday Islands, while promoting the island on a blog.
The "island caretaker" will be expected to stroll the white sands, soak up the sun, snorkel the reef, "maybe clean the pool" — and report to a global audience via weekly blogs, photo diaries and video updates.
The winner, who will stay rent-free in a multimillion-dollar three-bedroom beach home complete with pool and golf cart, must be an excellent communicator and be able to speak and write in English.
.
goldhunter85 said...
Sounds great when does it start.
.
"This is a legitimate job which is open to anyone and everyone."
Applications are open until February 22.
Eleven shortlisted candidates will be flown to Hamilton Island in early May for the final selection process and the six month contract will commence on July 1.
Job-seekers can apply at Islandreefjob.com
.
I don't know what's going on with this link that I got from FOXNews but I tried it but it didn't work. I also went to other websites that had this same story and their link don't work either.
Maybe it's an OVERLOAD or HOAX that is a deliberate attempt to dupe, deceive or trick an audience into believing, or accepting, that something is real, when in fact it is not; or that something is true, when in fact it is false.
.
ecrunner said...
Apparently the site has exceeded its bandwidth capacity and crashed. Too many people want this dream job, the poor site couldn't handle it. My take on it is that a person has a very unlikely chance of getting this position. I have applied to similar jobs that have been based throughout Europe with no luck (duh). What is funny to me is that the site crashed! Wouldn't you think they would increase it enough or make a redirect knowing this would go viral like this?
I can't even get it from my Portland based wireless internet.
.
Posted by The Man at 1/13/2009