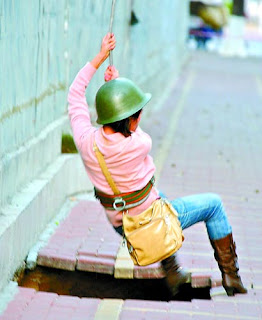 A Chinese couple disappeared when a hole suddenly opened up in the pavement as they were taking a stroll.
The woman fell into a deep pit below Haiyan Street in Zhuhai but the man did not fall so far and managed to climb out and call the police.
Firefighters had to be called to rescue the woman when police officers realized the pit was at least 20 to 25ft deep and they couldn't even see her.
A crane was brought in to haul the woman out and had to be stationed a distance away because of the danger of more of the pavement collapsing.
Throughout the whole rescue mission, the man talked with his worried girlfriend on the phone to keep her spirits up.
She was finally lifted out after being buried in the hole for nearly two hours. Her boyfriend gave her a big hug, but she was still shivering and too frightened to speak.
.