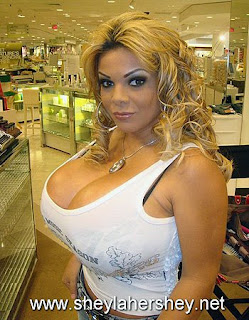 A woman from Texas has reportedly undergone nine breast enlargement operations to become the proud owner of the world's largest breasts — size 38KKK.
American doctors had refused to carry out any more operations on Sheyla Hershey, 28, when her breasts were a staggering 34FFF, but that didn't stop her from going under the knife for the record breaking surgery.
"To me, big is beautiful. I don’t think I have anything to worry about," the Houston-resident said.
Still determined to increase her bustline, Hershey jetted off to Brazil where there are no limits on the size of implants.
The surgery required a full gallon of silicone.
.
Click to view photos of Sheyla Hershey website
.

Who knows she's a blonde she didn't think about that,
she just want the attention she's getting.
.
Tattoo Jim said...
I just want to push her forward and see how many times she bounces.
It could be a new olympic event.
What the hell are these people out there thinking??????
.
trail dust said...
Her eyes are just as creepy as those tits.
.
Posted by The Man at 2/05/2009