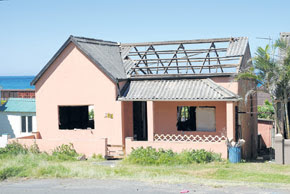 Selling her roof to pay the bills
Residents have raised concerns over the behavior of a neighbor who is knocking down her house piece by piece and selling it off to survive.
Alarmed neighbors say they have seen Janet Muller’s house being turned from a home into an empty shell over the past three months, as she sells off furniture, electrical appliances and now even planks and other fittings.
"This lady really needs help.… Look what she’s doing – everything is in pieces and she’s just selling," said worried neighbor Danie de Beer.
De Beer said Muller’s family was aware of the situation but apparently did not want any thing to do with her.
One neighbor, who asked to remain anonymous, said it was heartbreaking to see what Muller was doing. She said they feared for Muller’ s safety since she was vulnerable in the dilapidated home.
"Our suburb has changed from a quiet one to a noisy one. This street has become so busy because people want to see what’s happening," said the resident.
Another resident, who also did not want to be named, said the only time the authorities paid attention was when Muller stripped the electricity meter at her box.
According to the resident, municipal officials came to disconnect Muller’s electricity when notified .
Friday, two men were busy dismantling the roof. Floorboards had been partially stripped and there was no toilet or bathroom, or furniture, left in the home.
I am selling to buy. " She said she was doing nothing wrong. "I’m living peacefully here."
.
Japanese homeless living in internet cafes
The economic crisis is taking its toll on Japan with rising levels of homelessness. But some Japanese have found a most unusual new home. An hour outside the capital, Tokyo, an internet café is no longer just a place to hang out. It has small private rooms that can be rented out for around £10 a night. Residents can order food and even take a shower. If they stay for more than a month, they can even register the café as their address for job hunting and so that they can receive government funds.
Video..
.
In China
Policewoman Wang Yuhui talks down a young woman intending to kill herself by jumping off of a six storey residential apartment building in Changchun, China 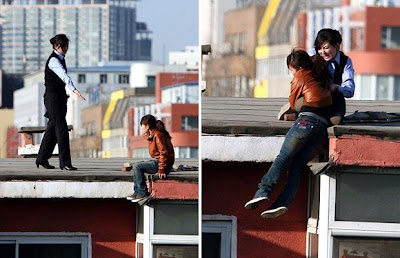 Damn, those stories about people selling everything they own, including pieces of their homes, in these hard economic times, makes me glad I've still got a roof over my head. There's always somebody worse off than you think you are...

I am lucky I get a monthly S.S.D.I. and medical my house is paid in full so I don't have to worry too much for now.