A motorist drove his Rolls-Royce through a window and into a Tesco superstore after receiving a bed from the firm which was delivered without a mattress, his wife claimed.
Robert Caton, 50, went to the supermarket to remonstrate with managers after he ordered the bed from Tesco Direct, his wife Deborah, 43, said.
She claimed he was unhappy with their response and that he then drove his car through the store's window, forcing shoppers and staff to dive for cover. 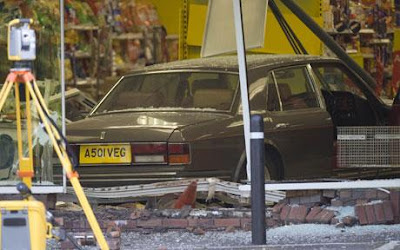 A worker at the store claimed that minutes before he careered into the store he had tried to buy alcohol at the supermarket but staff refused to serve him.
He then allegedly stormed out of the shop and got into the Rolls-Royce, where store managers tried to reason with him.
Moments later staff and shoppers watched as Mr Caton drove at the store and crashed into a window by the checkouts at 4.30pm on Wednesday, demolishing at least two checkout stalls at the end of aisle number 11: biscuits and confectionary.
Mrs Caton, who has a son, said: "I am standing by Robert - he had a genuine complaint with Tesco.
"We had ordered a wardrobe, a chest of drawers and a double bed from Tesco Direct but when they delivered the bed it did not include a mattress which we thought we had paid for.
"Robert went down to see the manager but he said there was nothing he could do about it."
Customer Patrick Ford, a 49-year-old designer, said: "I heard crashing and breaking of glass and what sounded like metal grinding. I turned round and saw this tidal wave of plastic, metal and glass coming towards me.
"The driver then reversed and came forward again so he was right inside the building." 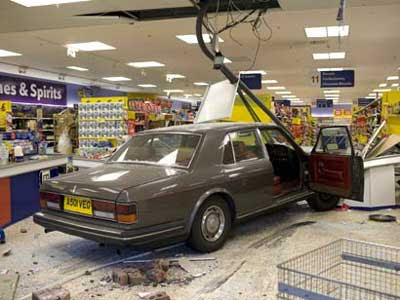