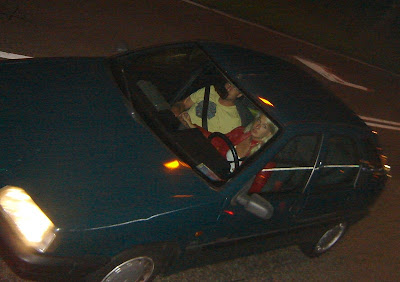 .
Drunk Driver Having Sex
A man was caught having sex while driving because he and his girlfriend could not wait until they reached their destination, a court has heard. Bradley Dean Milne, 33, was charged with not wearing his seatbelt, driving without due care and drink-driving when a witness called police after seeing his car swerving all over the road.
Darwin Magistrates Court heard that the couple were planning to drive to East Arm Wharf in the Mazda ute to have sex. Police prosecutor Leigh Cahill said Milne "became aroused" and the woman gave him oral sex while he was driving. Milne was swerving from one side of the road to the other until the car stopped at traffic lights. When they turned right onto Berrimah Rd, the woman straddled Milne while he kept driving, swerving into the curbside and back into the middle lane.
.
Posted by The Man at 5/25/2009