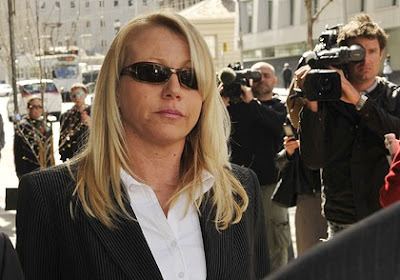 A Melbourne stripper has been found not guilty of using a dildo to rape the best man at a buck's night.
Linda Maree Naggs, 40, pleaded not guilty to violating the man's anus during a naked XXX-rated show in a house in Mornington on September 24, 2007.
A jury of six men and six women took one hour and 50 minutes to clear her of the charge.
Ms Naggs, a working mother and professional dancer of 13 years of Rosebud West, cried and dabbed her eyes when she heard the verdict.
The County Court jury had been asked to decide the crucial issue of deliberate penetration against the suggestion of possible "accidental rape".
.
Posted by The Man at 8/06/2009

Such a wonderful creation! I'm so pleased to find your blog!