A Briton was found smuggling 1,000 live spiders out of Brazil 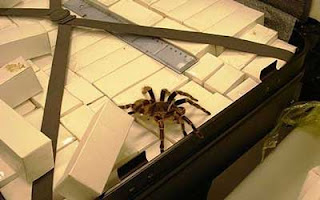 The animals were packed into individual boxes and locked in two cases that had been checked as baggage, a police official said.
The live cargo was discovered on Wednesday at Rio de Janeiro's Tom Jobim International Airport as it was being X-rayed for loading onto the plane, the official said.
He would not name the man or say where his flight was going to but a federal police statement said he could face a fine of up to £1.5 million for animal trafficking.
.
Posted by The Man at 11/13/2009