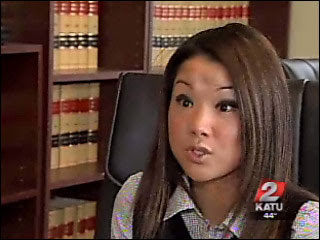 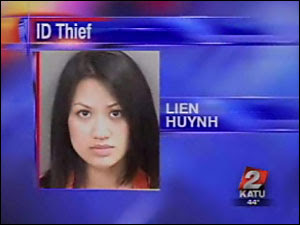 .
A Clackamas County woman fights to clear her name after her identity is stolen and police arrest her in front of her family for crimes she didn’t commit.
Kim Fossen came to KATU News last week after Clackamas County deputies shackled her and locked her up in front of her two-year-old child on a felony fugitive warrant, accusing her of theft and prostitution.
The warrant was out of the state of New York charging her with burglary in the second degree and grand larceny.
Fossen sat in jail for more than a day but she wasn’t the criminal; instead, it was 22-year-old Lien Thi Huynh, a Miami Beach escort who was using Fossen’s identity for at least three years and committing crimes in her name.
But in Naples, Florida police finally got the right person – Huynh – the fake Kim Fossen.
Even Huynh’s mug shots from Miami-Dade and Broward counties listed her as 30-year-old Kim Fossen.
Police accused Huynh of a bar hook-up theft. They said she stole a man’s Jaguar with $168,000 in jewelry and Louis Vitton Luggage after meeting him in a bar, hooking up with him the next day at a restaurant, and then going to the man’s house.
.
Posted by The Man at 11/14/2009