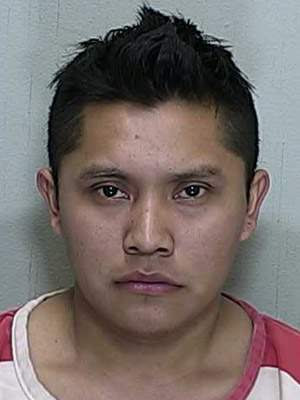 A 25-year-old man was arrested Tuesday night on charges of raping a 76-year-old woman in her Umatilla home
Juan Cahuich-Santiago, boyfriend of the alleged victim's granddaughter, was staying with the family at the time, according to the Marion County Sheriff's Office. Other family members had gone to buy groceries on Jan. 9 and returned to find the grandmother lying sideways on a recliner with her clothes askew.
She had been able to stand before their trip to the store but could not stand up after their return. She was taken to a hospital.
In an interview, Cahuich-Santiago at first told investigators, through a Spanish-language translator, that he didn't rape the woman. Later, he admitted having sex with her while using a condom, according to the Sheriff's Office. He reportedly said he had been watching a pornographic movie and decided to approach her.
.
Posted by The Man at 1/16/2010

"What a pathetic person. Hope they fry him slowly."