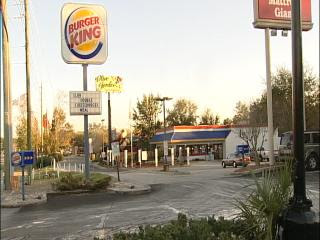 Bryant Keith Jones, 32, and Woody Bernard Duclos, 20, were arrested after customers at the Jacksonville Burger King where the two worked reported a blue pill was placed inside their sandwiches.
Turns the blue pills were Hydrocodone.
Tomeria Kendrick and his mother visited the Burger King and bought a chicken sandwich at the drive-thru. Inside the sandwich, he told police he found a blue pill. His mother took him to Fire Station 54; once he was cleared, she went back to Burger King - sandwich and pill in hand.
Later that evening, Kendrick suffered a seizure and was transported to Baptist South as a precaution.
Ernest McHenry and a coworker visited the restaurant about an hour after Kendrick and his mother left and bought a fish sandwich and a cheeseburger. There was a blue pill inside McHenry's sandwich.
Police were summoned.
After figuring out who was making the specialty sandwiches police questioned Jones, who told the cops that he had a bottle of prescribed Hydrocodone with him and had given three to a coworker, Duclos, who was complaining of back pain.
A witness told police she believes Duclos "did this because he was disgruntled and angry" in his work.
Burger King fired the employees.
But losing their jobs is probably the least of their concerns now -- the sheriff's office is investigating.
.
.
Posted by The Man at 2/18/2010