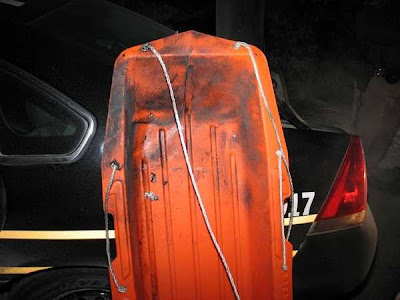 A 62-year-old Independence Township man hosting an outdoor winter party in his backyard was rushed to the hospital Sunday night after the explosive backpack he rigged to power him on a sled exploded, police said.
“Apparently, he has this sledding party every year, and he always does outrageous things at it, but he’s never blown himself up before,” McCabe said today. Before the mishap, the man had been drinking, he said.
The man is thought to have constructed the backpack from a used automotive muffler, which he filled with gasoline and gunpowder, “trying to get a rocket-launch effect,” McCabe said.
“He asked another person to light a wick and then began to sled down a hill. At some point during the ride, the device exploded,” he said.
Police did not release the man’s name. No charges have been filed but police are considering whether to charge the man with possession of an explosive device, McCabe said. Officers confiscated the man’s orange plastic sled, a motorcycle helmet he wore during the incident and the muffler-launcher device as evidence.
.
Posted by The Man at 2/03/2010

He was not a rocket scientist