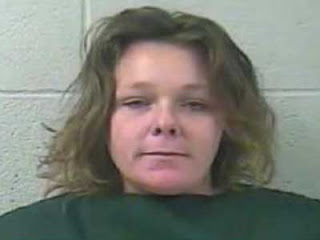 An Owensboro woman is in trouble after officers say she used a rather unusual technique to assault a jailer.
According to the Daviess County, Kentucky, Detention Center, Toni Tramel was picked up Thursday on charges of public intoxication.
As part of the process to book her into the jail, Tramel was sent into a room with a female jailer to change from her street clothes to jail clothes.
The jailer says while the inmate was changing, Tramel took off her bra and squeezed her breast, causing a stream of milk to hit the jailer in the face and the neck.
A release from the jail says the officer was able to "decontaminate herself" and "clean the bio-hazard off her."
Tramel now faces charges of assault on a police officer.
.
Posted by The Man at 3/08/2010

Maybe she worked here before:
http://tinyurl.com/ygwlmkj