Getting Caught By His Thang

Suspect left t-shirt with his picture at crime scene
After being released from a prison in mid-November, the 25-year-old felon--who had spent nearly seven years locked up for armed robbery and breaking and entering--apparently printed up a nifty t-shirt with his picture and the slogan “Making Money Is My Thang.”
As seen in the below police evidence photo, the image Huntley chose is a mug shot taken after one of his earlier arrests.
. 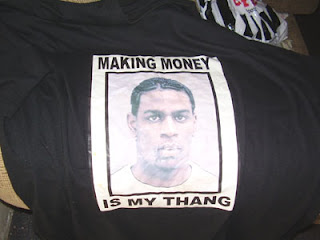 .
The t-shirt is in police custody because, investigators allege, Huntley participated in the home invasion robbery. According to cops, one victim told investigators that two black males “willfully and unlawfully entered his residence” and stole valuables, including jewelry and a wallet.
But as the robbers fled the crime scene, the black t-shirt somehow fell out of the duo’s getaway car. Huntley surrendered to police a day after a Crime Stoppers appeal was made seeking the public’s help in identifying the man pictured on the garment.
.
Posted by The Man at 4/05/2011