A dwarf who appeared in the Harry Potter and Star Wars films has dodged a short spell behind bars for indecently exposing himself to a teenager on a train.
. 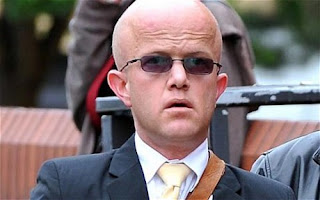 .
Former pantomime star Nicholas Read, who played a Ewok in Return Of The Jedi, was given a suspended 20-week jail term after a judge said it would offer the best opportunity for rehabilitation.
Read, of Wade Close, Cheadle, north Staffordshire, was convicted of indecent exposure last month after a 17-year-old girl told Leicester Crown Court how the actor performed a sex act under the cover of a juggler's hat.
.
Posted by The Man at 7/30/2011