Last laugh was on the store owner

When three men were found huffing nitrous oxide -- also known as laughing gas -- from balloons in a parking lot, officers were led to a store called Purple Haze, police said.
. 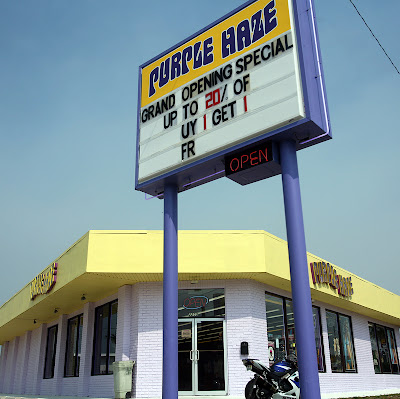 .
That's because the huffing trio told investigators that the owner of Purple Haze sold them the painkilling substance and taught them how to sniff it from the balloons, said Sgt. Mike Fowler.
Nitrous oxide has several uses, including to numb pain from dental work, as well as for making whipped cream and in auto racing to speed combustion.
Two undercover investigators went to Purple Haze and asked to purchase nitrous oxide and the paraphernalia used to inhale it. At that point, the store owner, Yohan Cohen, gave the investigators instructions on how to use the paraphernalia to inhale the gas, Fowler said.
Police recovered $600 worth of nitrous oxide and paraphernalia from the shop, Fowler said.
Cohen and employee Aline Elakayam were arrested and charged with sale of harmful chemicals and possession of drug paraphernalia.
..
Posted by The Man at 8/11/2011