A 36-year-old woman lost two fingers and a thumb when she tried to wake up her boyfriend with fireworks.
. 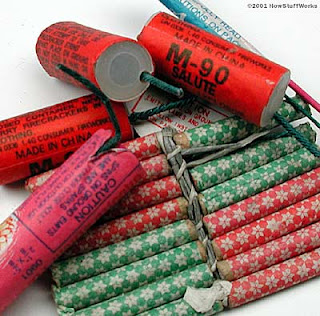 .
The woman and her boyfriend told the Gainesville Police Department that they had been drinking before the incident at the apartments.  The woman said she was holding a fireworks novelty item in her hand when she lit the fuse. She had been planning to toss the device out the front door, thinking it would make enough noise to wake her boyfriend.
Instead, the device exploded in her hand, tearing off her thumb, middle and ring fingers. The blast was so powerful that police said they found one bone remnant embedded in the ceiling.
The woman was taken to Shands at the . Her boyfriend told police he did not realize that the couple had any fireworks left over from the Fourth of July. He also said the woman’s actions were out of character.
..
Posted by The Man at 8/10/2011