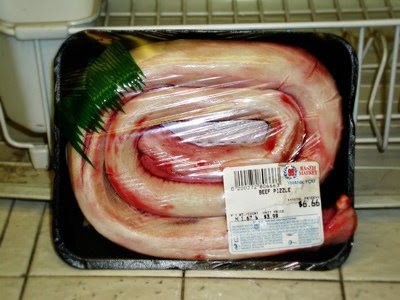 OK I love Chinese food but I can’t even think about eating any kind of penis for dinner!!! This one is about an Asian delicacy made out of Bull Penis.
Heard about stuff made out of Bull testicles but this is where the urine comes from and this is what he uses to copulate.
OK it goes like this. The best Bull penis is bought by the cook from the local market; remember it’s priced by the length (3 feet+), color, freshness etc. Now this is brought back to the kitchen the first and most important part of the deal is cleaning the urinary tract this is done with water first and then with vinegar. Now the cleaned penis is to be cut, the best part of it is the head that gets the most blood flow this is like usually given to the most important guest. And so goes the tale. These are prepared by the most experienced chefs only. I do not think eating animal’s genitals can be fun or tasty or anything of the sort that would be positive so why do people do it? The reason is simple its a complex of wanting to do big things a bull is a big animal and a penis is something that is considered very important so eating its penis gives people a feeling of having done something big or gives them something to brag about. Its not the taste its not a common food even in Asia its in fact a delicacy that only the Emperor had in the pastShould we be so narrow minded ? The question remains.