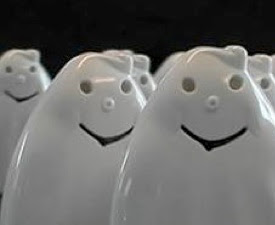 German men are being shamed into urinating while sitting down by a gadget which is saving millions of women from cleaning up in the bathroom after them.

About 1.8 million toilets are already haunted by Spuk, or Spook, as the little $10 device is called. Attached to the underside of the toilet seat, Spuk quietly endures sitting visitors. But anyone trying to lift the seat and attempt to stand and urinate (known as “Stehpinkeln“) should be prepared for the ghost’s unrelenting wrath.
“Hey, stand-peeing is not allowed here and will be punished with fines, so if you don’t want any trouble, you’d best sit down,” one of the devices orders in a voice impersonating the German leader, Chancellor Gerhard Schroder. Another has a voice similar to that of his predecessor, Helmut Kohl.
“Excuse me, but there’s a penalty for peeing while standing in this house,” it warns culprits. “You’d better not risk any problems and sit down!”
read more of this entry
Posted by The Man at 7/08/2007