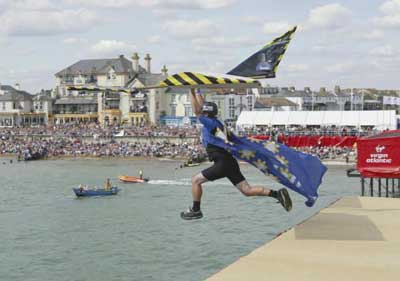 Birdman rally is cancelled
Those magnificent men in their non-flying machines are looking for a new runway.

Organizers have cancelled this year’s International Bognor Birdman competition, because of health and safety concerns.

The event involves running off the end of Bognor pier in an attempt to fly the furthest distance.

Maintenance work has left the pier 18.2 meters shorter, and organizers fear that the water at the end of the pier is too shallow. This year would have been the 30th anniversary of the Birdman competition. The event has been held in Bognor Regis every year since 1978, though it started in 1971 in nearby Selsey.
.
Posted by The Man at 4/10/2008