Indonesian masseuses must lock their pants 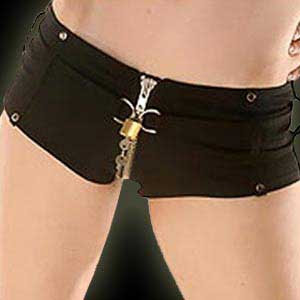 Massage parlors in an Indonesian town are asking their female masseuses to padlock their skirts and pants to make it clear that sex is not on offer.
But the move has been protested by the women's affairs minister of Indonesia, where massage parlors are often a front for prostitution. "It is not the right way to prevent promiscuity," Meutia Swasono said. "It insults women ... as if they are the ones in the wrong."
At least one parlor in the tourist town of Batu on Java Island has required its masseuses to padlock their skirts or trousers to make it clear that the establishment does not tolerate prostitution.
Others in the town started following suit after local officials suggested it was a good idea at a recent meeting with parlor owners.
"The padlocking phenomena have been seen at various parlors and it is something we like," said Imam Suryono, the head of the town's public order authority. He denied media reports that he had formally ordered them to wear padlocks.