Driver banned for having a untidy car 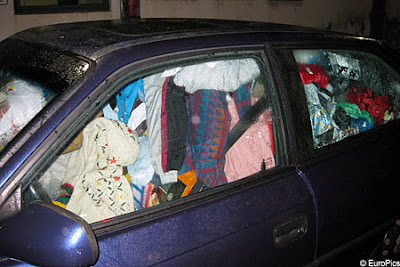 Police have banned a woman’s car from the road - for being too untidy.
The Vauxhall Astra was so full of junk, magazines, old clothes and even bits of furniture that they could barely see the driver at it roared down a motorway in Dusseldorf, Germany.
The driver - who has not been named by police - has been banned from taking the car on the road again until it has passed a tidiness test.
Police said the car was so full of junk the woman's face was pressed up against the front window as she drove.
"I'm sure this will make most people feel a lot better about leaving the odd sweet wrapper lying around in their car," joked one police source.
.