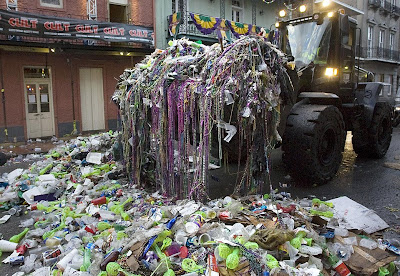 Not cleaning up after Katrina - cleaning up after Mardi Gras.
Crews removed trash from Bourbon Street after Mardi Gras in New Orleans, which celebrated its biggest since Hurricane Katrina in 2005. The celebration was deemed a great success this year; only seven people were shot, none of them fatally. Police arrested two men carrying guns.
.
Tattoo Jim said...
Maybe they could build a levee out of all that trash...
.
Posted by The Man at 3/01/2009