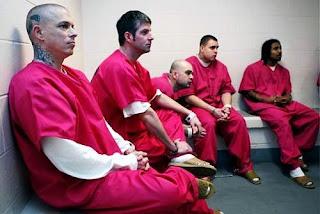 If you commit the crime, you’ll do the time - in hot pink.
That’s the new look at the Kenton County jail, where traditional orange prison jump suits were replaced Friday with hot pink ones. The switch was prompted one Sunday afternoon last fall when Col. Scott Colvin, chief deputy jailer, was looking from his office window toward Paul Brown Stadium and noticed all the Cincinnati Bengals fans decked out in orange. "I thought, ‘Man, if someone got away from here, they’d score a hot dog and get away," Colvin said. Jailer Terry Carl approved the switch. The jail purchases new garb each year to serve up to 500 inmates. The cost is the same, no matter the color. Other jails around the country have also gone with the pink look."
.
Why didn't get "CRIMINAL" or "ESCAPEE" printed all over the jump suits.
.
Caitlyn said...
It's also moderately demeaning to the men- it emasculates them.
Early results from the pink jumpsuits have been positive.
.
Tattoo Jim said...
I guess it's hard to be in a prison gang and be "tough" wearing pink...
.
They went from a big tough hard ass to a little Pantywaist Sissy.
Maybe it's to calm them down.
.
Gerry said...
Too many gangs and criminals look at jail time as a 'badge of honor'.
Jail SHOULD be demeaning and embarrassing so that they WONT want to come back again.
When you bring the SHAME back into PUNISHMENT, the crime rates will go down again....
.
Posted by The Man at 3/01/2009