Obese man had to take rental truck to get to court 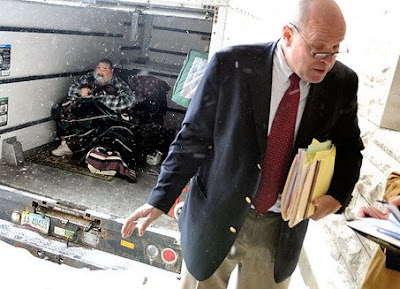 Stephen Turo of Genoa sits in the back of a rental truck after his arraignment in Cayuga County Court. The arraignment took place on the loading dock. To the right is Turo's attorney Doug Bates.
.
Auburn, NY -- Stephen A. Turo, of Genoa, sat on a chair covered with a blanket in the back of a rental truck, shivering in the 18-degree cold, as Cayuga County Judge Thomas G. Leone arraigned him Monday on a 24-count indictment alleging sale and possession of prescription painkillers.
Turo, 56, of 1138 Maple St., by his own estimate weighs about 700 pounds. He was accompanied to the arraignment by his wife and daughter, and he sucked oxygen from two plastic tubes fed by a portable machine during the proceeding.
It was an unusual setting for a court proceeding: a 10-foot box truck backed up to the loading dock in the rear of the Historic Post Office in Auburn. Leone and a dozen other court personnel stood in the swirling snow for the 15-minute proceeding.
.
Posted by The Man at 3/10/2009