Police mistaken a teen for a baby 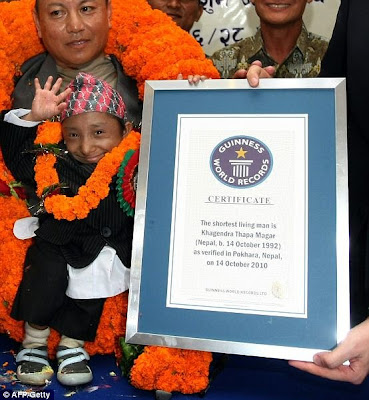 The world's smallest man Khagendra Thapa Magar has had a run in with police in Australia, who wanted to know why he was not traveling in a child's booster seat.
At just 27 inches high and weighing 11 pounds, Khagendra is around the size of a six-month-old.
While on a trip to Oz to raise awareness about sex trafficking and get donations for his charity, cops pulled over the car he was traveling in for a random breath test.
Khagendra, who is named in the Guinness Book of Records as the world's shortest man, suffers from a condition called primordial dwarfism.
But despite the obvious challenges presented by being so small, the teenager says he doesn't wish he were taller.
.
Posted by The Man at 3/11/2011