Stiff opposition over a condom 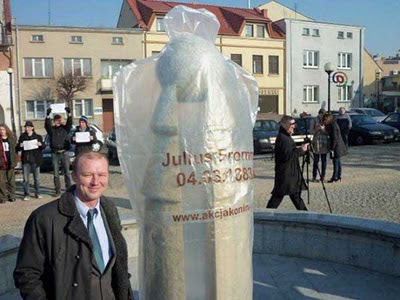 With an upstanding municipal fountain nicknamed "The Penis" and a place in history as the town in which the inventor of the modern condom was born, many might argue that Konin in provincial Poland was more or less asking for it to happen.
Last weekend it did: an artists' group stormed the fountain and covered the structure with a mammoth transparent plastic preservatif, causing moral outrage among some officials and conservative Catholics.
The stunt was in honor of Julius Fromm, who invented the modern condom.
.
Posted by The Man at 3/11/2011