International Pillow Fight Day was celebrated around the world at the weekend, marking the fourth year of the glorious annual feather-fest.
Cities around the globe were filled with hundreds of thousands of pillow-brandishing types for the event, from New York's Union Square to Nelson's Column in London and the Dr Sun Yat-sen Memorial Hall in Taipei.
Started by The Urban Playground Movement, International Pillow Fight Day sees participants smack each other around with their feather-filled weapons.
The organization’s mission is to make more use of public spaces and ultimately replace the world's couch-potato habits.
.
﻿ 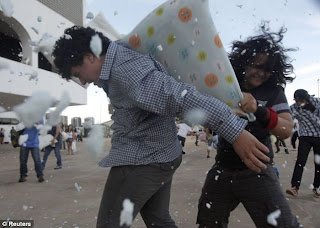 .
﻿In the UK capital, participants showed up for the 2011 event wearing pyjamas, dressing gowns and fancy dress.
In the Big Apple, fighters also rocked up in fancy dress, with costumes ranging from ninja chic to a spot of Spartan style.
In LA, one participant turned himself into a human pillow by strapping some to his body with duct tape.
.
Posted by The Man at 4/04/2011