The ongoing dispute over red-light cameras, a judge has ruled that police can't ticket drivers for running red lights.
. 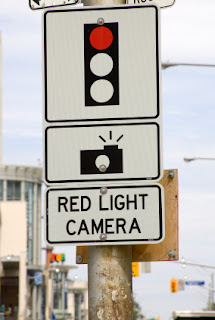 .
County Court Judge Fred Berman decided that tickets for running red lights are unconstitutional when issued by a police officer because they carry a higher fine than red light camera citations — about $260 versus $158 — and impose points on the driver's license.
That violates the United States Constitution's and the Florida Constitution's equal protection provisions, Berman ruled.
.
Posted by The Man at 6/10/2011