Translation to English is not always good

http://www.sunjournal.com/story/221629-3/LewistonAuburn/Shower_surprise_Snake_drops_in/
July 20, 2007
LEWISTON - Here's your hygiene tip of the day: If you want to get in and out of the shower as quickly as possible, try going nose-to-nose with a ball python while you're lathering up. It happened to Khadija Bile Thursday afternoon at her Maple Street apartment. Bile was halfway through her shower at about 5 p.m., when the 3-foot serpent crawled from a ceiling tile above her. For a moment, snake and woman regarded each other in the steam and spray. "It was just hanging there, right in front of my face," Bile said. "I was shocked. Then I ran out of the bathroom and toward the door. I was naked, but I didn't know what to do." 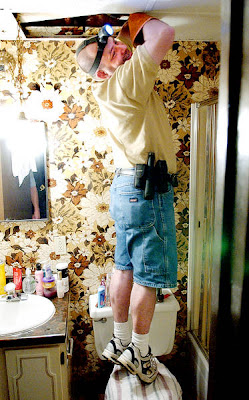 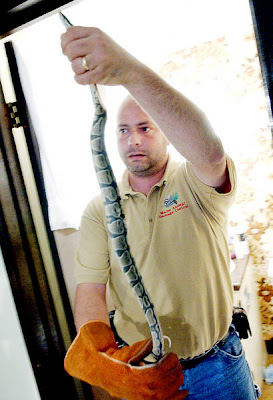 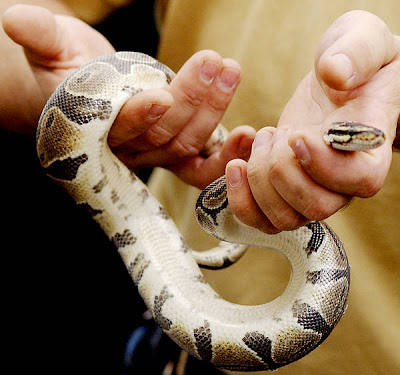 A commercial for Skittles 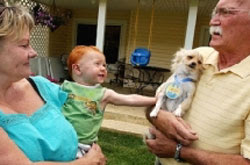 Zoey the Chihuahua may be among the smallest of Denise and Monty Long's four dogs, but she's the biggest hero in their Masonville home after saving their 1-year-old grandson from a rattlesnake. Zoey's heroics came last week while the Longs were baby-sitting their grandson, Booker West, as they often do at their home just west of Loveland. The youngster was playing by a birdbath in the carefully manicured backyard with Zoey standing nearby. "Our little dog heard the rattle and I think she knows what a rattlesnake is," Denise Long said. So, as the snake coiled to strike, the dog jumped in between the boy and the rattler and suffered a bite to the head. The couple rushed Zoey to a veterinarian in Loveland, who began treating the 11-month- old, 5-pound long-haired Chihuahua with plasma, morphine and anti-venom treatments. By then, the dog's head had swelled to the size of a large grapefruit. About all they could see of her face was the little black button that was her nose. But the treatments worked, and by Sunday, Zoey was back playing with the Longs' two Labrador retrievers and their Yorkshire terrier.

One Person's Junk is Another's Treasure 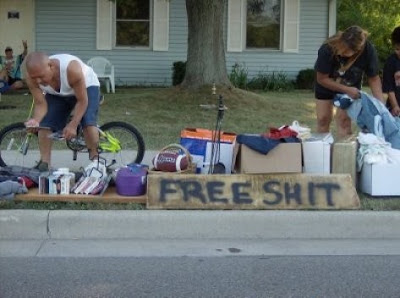 You no longer can trust the Catholic Church

Priest steals $200k from parish, to blow it on male strippers.
The Rev. Mark Sorvillo loved taking his parish's money and spending it on himself.
Trips to Rome, Venice, Paris. And $900 meals at New York restaurants.
In 1999, Sorvillo found someone else to lavish his parishioners' collection-plate donations on -- a male stripper.
Sorvillo -- who pleaded guilty Friday to stealing nearly $200,000 from St. Margaret Mary parish on the -- gave cars, plane tickets and thousands of dollars in cash to James Sosnicki, a married Louisville man who stripped frequently at gay clubs in Chicago, law enforcement sources said. » Full article here
Posted by The Man at 7/23/2007 No comments:

Unruly schoolboys or sex offenders?
The two boys ran down the hall of Patton Middle School after lunch, swatting the bottoms of girls as they ran - what some kids later said was a common form of greeting.
But bottom-slapping is against policy in McMinnville Public Schools. So a teacher's aide sent the seventh-graders to the office, where the vice principal and a police officer stationed at the school soon interrogated them.
After interviews with students the day of the February incident, the officer read the boys their Miranda rights and hauled them off in handcuffs to juvenile jail, where they spent the next five days.
Now, Cory Mashburn and Ryan Cornelison, both 13, face the prospect of 10 years in juvenile detention and a lifetime on the sex offender registry in a case that poses a fundamental question: When is horseplay a crime?

Editor's note: When I was in the seventh grade the girls like getting swatted on the butt has long the boy doing it didn't hit hard. The girls liked the attention they were getting.
Posted by The Man at 7/23/2007 No comments: 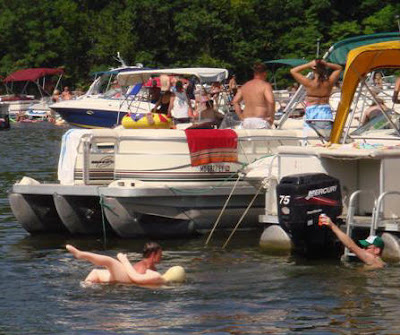