Kid Rides on Dad's Shoulder Through Traffic
.
trail dust said...
If you’re going to do this, make sure the kid’s out of diapers. Don’t ask!
.
Don't you mean make sure the kid has a diaper on?
Because at that age they don't have the control part down yet.
.
trail dust said...
Ok, my kid was still of age to be in diapers. We were at the fair and she couldn’t see above the crowds so on my shoulders she went. About 3 minutes later I smelled ‘raw sewage” and my shirt had turned from white to brown. Luckily there was a vendor selling shirts nearby and a wash room. So to sum it up, make do this ONLY if the kid is potty trained. Live and learn!
.
Posted by The Man at 1/30/2009 No comments: 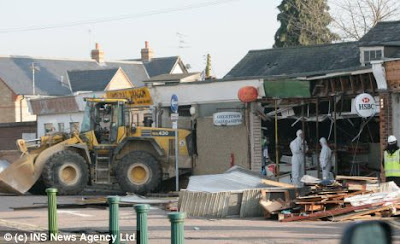 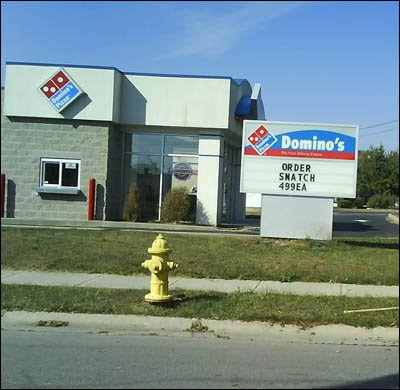 How to do a Faceplant

.
trail dust said...
Alcohol and a sudden remembrance of youth in front of the kids.
Most embarrassing indeed!
.
That might be true for most adults but there are people that don't get embarrassed very easily especially when they have been drinking. They would say so what and laugh.
.
Posted by The Man at 1/30/2009 No comments:

Teen arrested for posing as another student to take exam
A Schenectady teen is facing a felony charge after police said he dressed as a girl to take a Regents exam for a student at Schenectady High School. Steve Ference reports.
The exam is crucial for students hoping to graduate and get into the best schools - pressure that officials said may have led one female student to enlist a MALE friend to take the test for her.
Schenectady City School District Superintendent Eric Ely said, "When the proctor comes around to hand the test out, they know the girl whose name is on the test."
"Placed him under arrest for burglary for unlawfully entering the premises and committing the act of forgery," said Sgt. Clifford.
.
F-word on Jury Summons
A response to jury duty sparked a surreal brush with the law for an innocent woman.
Denise Morrice’s jury summons was returned with the remark: "**** off! I’ve got better things to do. OK!!"
She did not write the abuse, nor receive the original letter.
It was sent to the wrong address and intercepted by a malicious tamperer, Teesside Crown Court heard.
But Miss Morrice was arrested, brought before Teesside’s top judge and had to explain herself in the witness box before being exonerated.
She likened her extraordinary experience to a bad dream or a Jeremy Beadle-style joke.
The jury summons was posted to her old home, where it was opened by someone else who scrawled the profane retort.
.
Woman paid man £20,000 not to rape her
A terrified woman wrote a would-be rapist a £20,000 cheque to leave her alone.
The frightened victim had the brainwave after a sex attacker barged into her home, pinned her against a wall and ordered her to get undressed.
As Martin Cartwright, 49, began undoing his trousers, the woman offered him the money.
Cartwright took the cheque and left but warned her: "If you say anything, even in a thousand years, I'll kill you."
Prosecutor Tim Forster told a court: "He put the money into his bank account. He told cashiers he had won the lottery."
When police caught up with Cartwright, he claimed he had heard voices from Jesus "saying I should rape someone".
.
Firefighter charged with manufacturing meth
A lieutenant with the Waterloo fire department has been arrested and placed on leave following an investigation by the local narcotics task force.
Investigators with the Tri-County Drug Enforcement Task Force arrested Jeffrey Scott Cutsforth, 48, of 359 Derbyshire Road, shortly after 4 p.m. Thursday on charges of conspiracy to manufacture 5 grams or more of methamphetamine.
The crime is a class B felony, and Cutsforth was taken to the Black Hawk County Jail. He was released on bond.
Records show agents with the drug task force were at Cutsforth's house to serve a search warrant Tuesday.
Cutsforth has been a firefighter for the city of Waterloo for 25 years, starting in 1983. He was promoted to lieutenant in 1997 and is a certified hazardous materials technician.
.
Posted by The Man at 1/30/2009 No comments:

The running of the Porta Potties 2008

Apparently not all cows are vegetarians

Some of them likes chicken every now and then.
.
.
Anonymous said...
You're really sick for posting that up. I don't know what kind of sick ass shit runs through your mind but you need a shrink if you like to see baby animals get eaten. Sick fuck, get some therapy. BTW, your site is going down the tubes.
.
About Small Bits and Pieces
My main goal is to post mostly "Strange and Unusual" news and pictures however some days there are only a small selection to choose from so I fill in with other things like hot women, jokes and other things of interest. Even though I can not please everyone all the time I like to please everyone most of the time.
.
Scheme Factory said...
Dear Anonymous, Welcome to the Sickfuck Club, anonymous!
.
Anonymous are you a VEGETARIAN?
I gave all kinds of information in the title and in the post you did not have to watch it.
What did you think someone cooked up some chicken and gave it to the cow?
Anyone that has watched any kind of nature films or National Geographic or any other films that includes animals you will see things like this it's called "FOOD CHAIN"
By the way it is the people in the background that are sick because they didn't try to stop it from happening and cheered about it.
.
By the way if anyone is sensitive about this material I do have a "ALL FAMILY" blog that's appropriate for all. There is no Sex, Violence or anything else to offend anyone.
However, if you comment make sure you use no offending remarks or language.
.
Tattoo Jim said...
Makes you wonder... maybe everything tastes like chicken to a cow.
You know, If you're offended and you've got to piss and moan about it don't hide behind "anonymous"... put your handle out there.
.
trail dust said...
…Anonymous said …“BTW, your site is going down the tubes”…
Sorry, no I’m not sorry, but I have to disagree as it is my morning ritual to check this site while I’m eating bacon. Small Bits & Pieces kicks bacon ass!
.
Posted by The Man at 1/30/2009 No comments: 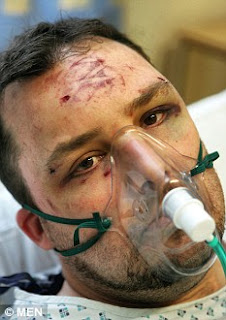 A footprint embedded into the bruised forehead of a robbery victim is the main piece of evidence that could lead investigators to his attacker.
Bar landlord Johnathan Robinson, 33, was hit by a car and knocked over Monday as he left his Salford, England, pub with about $3,522 in cash.
As he lay on the ground with a broken leg, one of the attackers walked up to him and stamped on his head before taking the money.
Officers are now checking shoe databases and speaking to manufacturers to find a match for the footwear.
"It is a vital clue," Detective Sgt. Julie Connor, said.
Police believe the gang may have come from the nearby Clifton estate. The Volkswagen Golf the thieves drove was stolen from the estate early Sunday and dumped near the bar.
It had false license plates that were stolen from another vehicle in Wigan, England.
Posted by The Man at 1/30/2009 No comments: