Nuclear Power Plant in your back yard 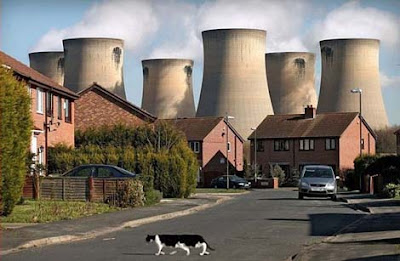 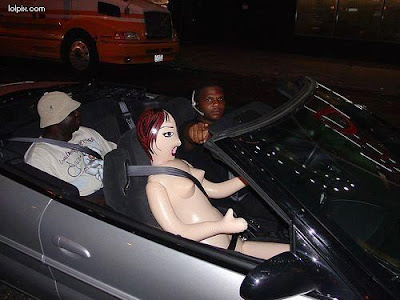 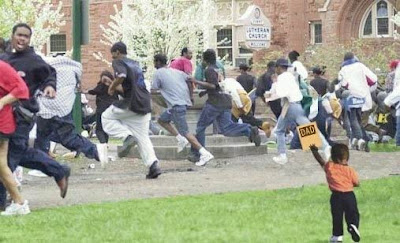 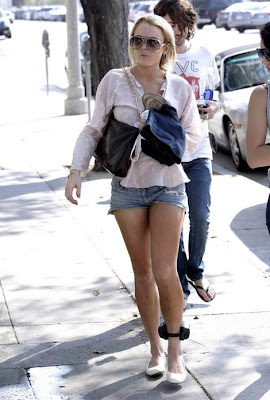 Lindsay Lohan, out of rehab and now wears an alcohol-detecting ankle bracelet?
Posted by The Man at 7/19/2007 No comments:

http://news.yahoo.com/s/ap/20070719/ap_on_fe_st/odd_lifesaver_spiders
July 18, 2007
HEMLOCK, Mich. - A woman who hates spiders is crediting them with helping save her from a house fire. Danielle Vigue, 18, says she awoke early Tuesday to find spiders in her room, and started killing them. When more showed up, she says she went across the hall and got into bed with her 15-year-old sister, Lauren.
"At first there were five, they were all around the light fixture," Danielle Vigue told The Saginaw News. "I hate spiders, they freak me out."
A fire apparently was smoldering in the attic of the home about 90 miles northwest of Detroit.
A few hours later, Vigue's 48-year-old mother, Debra, and 8-year-old sister, Shelby, smelled smoke, and flames greeted the family when they opened the door to the room Danielle Vigue had earlier left.
"I will never kill another spider again," she told WNEM-TV in Saginaw.
Richland Township Fire Chief Gary Wade, a 30-year veteran of the Saginaw County department, was surprised by Vigue's story.
"I've never heard of spiders saving someone from a fire before," Wade said.
Posted by The Man at 7/19/2007 No comments:

Ever since George Bush was re-elected, conservatives have been telling liberals to "get over it." Excuse me? "Get over it?" This wasn't a baseball game. This wasn't the Super Bowl. We're not sobbing in our beers because the Steelers whipped the Packers.
We're at war. People's lives are at stake. Every day, families are being destroyed, both here and in Iraq. To treat this election so dismissively is an insult to them and to the soldiers who gave life and limb in this war.
Posted by The Man at 7/19/2007 No comments: I believe is somewhere around $660 million.

This Bull Doesn't Mess Around He Gets Two At A Time 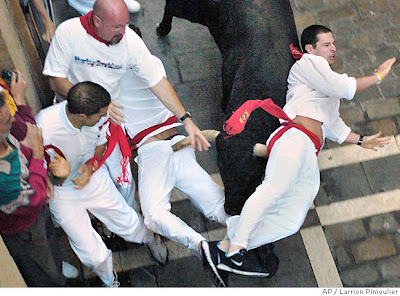 Labels: Funny Pictures, Insane, Not Using Their Brain, What a "Dumb Ass"

Does Your Shit Stink?

Poof Drops
Just a few drops in the toilet and that foul smell of your turds changes into the refreshing smell of Japanese mint. Ummm.... how about saving $10 and simply flushing the toilet instead?

Changing the Way You Do Your Business, One Drop at a Time

Imagine this: You are dating someone new. He/she invites you to a romantic, home-cooked dinner at his/her place. After dinner, the curry he/she took the time to make for you is not sitting well. What do you do?Or imagine this: It’s five minutes until your 9:00 a.m. board meeting. The coffee you had to wake you up starts to churn. You enter the restroom and see a bunch of your co-workers gabbing. What do you do?Poof it! Just a few drops of this liquid deodorizer in the toilet water and a translucent seal traps your odors in the water, releasing a refreshing scent of Japanese Mint to fill the air! Created for the sophisticated and bathroom conscious, Poof is packaged in an appealing yet discreet bottle that easily slips into your purse, pocket, or the palm of your hand.One drop of Poof will forever change the way you do your business!
Posted by The Man at 7/19/2007 No comments:

Revenge comes in many ways

Is This A Subliminal Ad?

British Teen Finds $90G in PlayStation 2 He Ordered on eBay

A British teen got more than he bargained for when he bought a PlayStation 2 on eBay.
When the package arrived at the 16-year-old boy’s Norfolk home, there were 65,400 Euros(approximately $90,200) inside, according to a BBC report. The police are now trying to trace the package back to the owner.
The boy reportedly received the PlayStation 2 on March 20. Two games were missing, and in their place was the cash.
Norfolk Police have until September 22 to hold the money before the matter goes to court. Once in court, the boy’s family could apply to have the money returned to them.
"We know that eBay is a great place to pick up a bargain, although in this case, we agree that the contents of the parcel were somewhat unusual and we will assist with any inquiries the police may wish to make," an eBay spokesman told the BBC.
Posted by The Man at 7/19/2007 No comments:

Mommy is talking on the phone and Daddy is too busy to play with me and the cat is hiding. 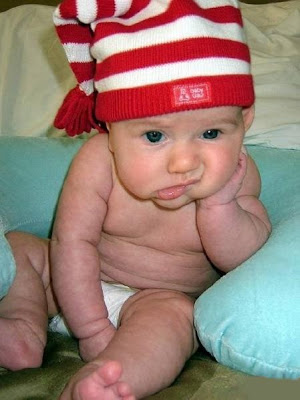 Other Captions
"Can't wait till Friday"
"Bummer Dude"
''Strained Carrots Blues''
Posted by The Man at 7/19/2007 No comments:

Do you get it now! 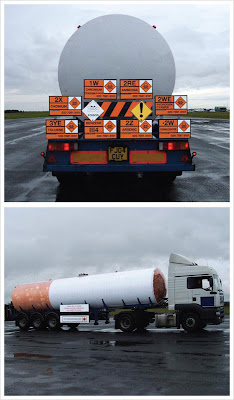 Cigarettes are Hazardous to your Health.

A man dashed into a police station at midnight.
"My wife," he gasped. "She's been missing since eight o'clock tonight."
"Particulars, height and weight asked the sergeant?"
"I don't know." said the man.
"Do you know what she was wearing?"
"No, but she took the dog with her."
"What kind of dog?" asked the sergeant?
"Brindle, bull terrier, weight 53 lbs, Four dark blotches on his body shading from grey to white, three white legs and rightfront leg brindled all but the toes. Small nick in his left ear."
"That'll do," gasped the sergeant. "We'll find the dog."
Posted by The Man at 7/19/2007 No comments:

Smile you are CCTV 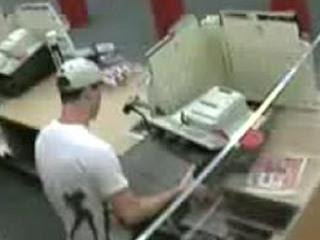 PALM BAY, Fla. -- A man walked off with a cash register from a Central Florida pharmacy early Wednesday morning, according to police.

Palm Bay police said that they are reviewing surveillance video from the 24-hour CVS Pharmacy, located at 1599 Palm Bay Road, in an attempt to track down the man.

Palm Bay police said the man walked into the store at about 1 a.m. and grabbed the cash register while employees were in the rear of the store. The man was inside the store less than one minute, according to police.

No one was injured.

Labels: Not Using Their Brain, What a "Dumb Ass"

When Signs Are Needed 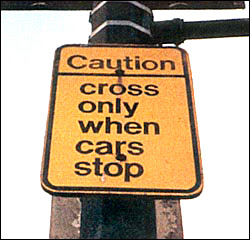 Caution, no need to state the obvious. 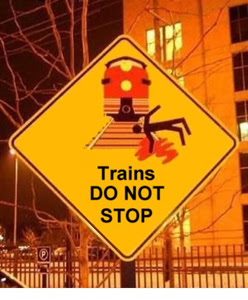 What did I just say, no need to state the obvious! 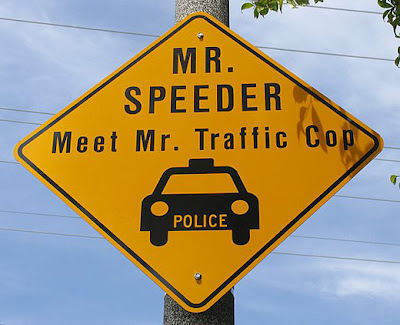 Well, maybe this will get your attention then? 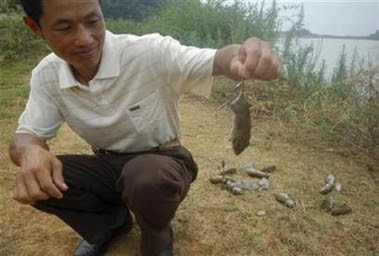 BEIJING (Reuters) - Live rats are being trucked from central China, suffering a plague of a reported 2 billion rodents displaced by a flooded lake, to the south to end up in restaurant dishes, Chinese media reported.
Rats had been doing a roaring trade thanks to strong supply over the last two weeks, the China News Service quoted vendors as saying.

"Recently there have been a lot of rats... Guangzhou people are rich and like to eat exotic things, so business is very good," it quoted a vendor as saying, referring to the capital of Guangdong province, where people are reputed to eat anything that moves.

Some Guangdong restaurants were promoting "rat banquets," charging 136 yuan ($18) for one kg of rat meat, the newspaper said.

But the restaurants denied their rats came from Hunan.

Local governments in Hunan have been grappling with the rats, which had already destroyed 1.6 million hectares (6,200 sq miles) of crops and could spread disease, according to media reports.

A lack of snakes, also a popular dish in the south, and owls, a traditional Chinese medicine, was held partly responsible.

Chinese media reported last week that some Internet users from Guangdong had offered rat recipes as a way to deal with the problem.