The U.S. Lingerie Football League is broadening its horizons to include a Canadian scantily clad franchise in , the league announced. League founder Mitchell Mortaza said the as-yet unnamed team will compete in the 2-year-old league's Eastern division.
.

GALLERY: Lingerie Football League
.
The women play seven-per-side full-contact football on a half-sized field wearing helmets, shoulder, knee and elbow pads, bras, and panties.
The players in the league's 10 teams don't get paid, but their uniform and travel expenses are covered by the league.
Mortaza said the experience exposes the women to careers in entertainment.
"It's really an opportunity for them to be elevated to (the level) of major sports for guys, and be on the cover of everything ranging from Playboy to ESPN to Fox News channel," he said.
Try-outs for the team will begin April 30, Mortaza said.
.
GALLERY: Lingerie Football League part 2
.
mother Judy Pfeifer told the Star she wasn't impressed by the concept of a league of attractive female athletes in skimpy clothing.
"What's next -- thong soccer?" she said. "I don't think this does much for gender equality."
.
Posted by The Man at 4/14/2011 No comments:

Labels: In The News, Sports

police chief cancels hundreds of tickets
Motorists are off the hook for more than 900 speeding tickets automatically issued by a mobile police camera in southwest .
The camera had been stationed in a park in on April 2 at the same time a youth soccer tournament, the Mid-American Soccer Classic, was being held.
Police Chief Neil Ferdelman tells that he canceled the tickets because of the tournament, which he says drew many out-of-towners who were unaware the camera was in use.
The tournament's director says there would have been consequences for next year's event if had decided to pursue the tickets.
At $95 each, the 900 tickets would have totaled more than $86,000. The chief says 70 of the tickets were mailed. Those motorists have been sent letters telling them: never mind.
.
Cooking oil mess gives city the smell of french fries
Approximately 30 gallons of used cooking oil has been spilled over several streets in city, leaving behind the smell of french fries.
Cranston Deputy Fire Chief Keith Newman said that the soybean oil was kept in 5-gallon containers that apparently fell off a truck. Firefighters found the containers in four spots around .
The cooking oil was spilled along an entire block of one street, a mess left for environmental officials to clean up.
.

Two year old served at Olive Garden
Olive Garden restaurants are making changes after a toddler was served alcoholic sangria instead of orange juice at a location.
News of the incident comes after an Applebee's in accidentally served a margarita to another toddler.
Orlando, Fla.-based Darden Restaurants says the mix-up happened March 31 in .
Jill VanHeest says she took her 2-year-old son Nikolai to the hospital after his eyes turned red and dilated and he began acting up. She said he was given fluids and released a couple hours later with no lasting effects.
VanHeest's attorney contacted the news media in after reports of the Applebee's incident this week.
said it will now mix sangria individually to order, instead of in batches as it had before.
.
Posted by The Man at 4/14/2011 No comments:

An advertising firm apologized for placing a billboard for a TV show called The Walking Dead on the side of a funeral parlor.
. 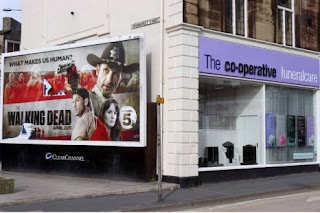 Click to enlarge
.
The unintended, "unfortunate juxtaposition" caused raised eyebrows in Consett, .
The roadside advert for the apocalyptic drama has since been removed from the exterior wall of the Co-operative Funeralcare premises, and an alternative has been pasted in its place.
A spokesperson for Clear Channel, the firm responsible for the billboard, said it was sorry. 'Clear Channel apologizes for any offence caused by the unfortunate juxtaposition of this advertisement, which was certainly not intended,' she said. 'We arranged to have it moved right away and it has now come down.'
.
Posted by The Man at 4/14/2011 1 comment:

Strange But True
A single share of Coca-Cola stock, purchased in 1919, when the company went public, would have been worth $92,500 in 1997.
Americans consume 42 tons of Aspirin per day.
Americans spend more than $5 billion a year on cosmetics, toiletries, beauty parlors and barber shops.
Bayer was advertising cough medicine containing Heroin in 1898.
Carbonated soda water was invented in 1767 by Joseph Priestley, the discoverer of oxygen.
Cheerios cereal was originally called Cheerioats.
Chewing gum was patented in 1869 by William Semple.
Coca-Cola was so named back in 1885 for its two medicinal ingredients: extract of coca leaves and kola nuts. As for how much cocaine was originally in the formula, it's hard to know.
Cocaine used to be sold to cure sore throat, neuralgia, nervousness, headache, colds and sleeplessness in the 1880s.
During the Prohibition, at least 1565 Americans died from drinking bad liquor, hundreds were blinded, and many were killed in bootlegger wars. Federal agents and the Coast Guard made 75,000 arrests per year.
False eyelashes were invented by film director D.W. Griffith while he was making the 1916 epic, "Intolerance." He wanted actress Seena Owen to have lashes that brushed her cheeks.
For two years, during the 1970s, Mattel marketed a doll called "Growing Up Skipper". Her breasts grew when her arm was turned.
Gatorade was named for the , where it was first developed.
Hershey's Kisses are called that, because the machine that makes them looks like its kissing the conveyor belt.
The ball-point pen was invented by two hungarian brothers: Georgo and Lazlo Biro.
If you put a raisin in a glass of champagne, it will keep floating to the top and sinking to the bottom, over and over again.
In 1965, LBJ enacted a law requiring cigarette manufacturers to put health warnings on their packages.
In 1984, a Canadian farmer began renting out advertising space on his cows.
In 4000 BC , men and women wore glitter eye shadow made from the crushed shells of beetles. Men and women walked around topless, and marriages between brothers and sisters were not uncommon in the Royal families. Cleopatra was married to her older brother, until he drowned in the . Then she married her 11-year-old younger brother.
In the 1700s, European women achieved a pale complexion by eating "Arsenic Complexion Wafers", which contained the actual poison.
.
Posted by The Man at 4/14/2011 1 comment: