A man in Spokane, Washington played dad to a dozen day-old ducklings by rescuing them from a ledge near his office, and then leading the entire brood to water with their mother duck.
.
It's a great story involving a banker after all the negative ones over the last several months.
This banker does have a heart after all!
As an animal lover, thank you!
.
Posted by The Man at 5/21/2009 No comments:

Woman gets stuck in Mets toilet
A Mets fan tried to make a diving catch when her gold tooth fell into a Citi Field toilet - and got her arm stuck in the commode. The unidentified woman's bizarre Flushing adventure happened during last Wednesday's game against the Atlanta Braves. It's unclear how long she was trapped screaming, but stadium security guards and emergency medical personnel eventually showed up. But they could not pry her loose on their own. They called for back-up — dialing up a worker from Cardoza Plumbing, the company that installed all 646 ultra-low-flow toilets at Citi Field. He rushed to the scene from his company's Jamaica headquarters 7.2 miles away, the sources said. The anxious victim, meanwhile, could only wait as the toilet continued to flush over her arm. At one point, she became more entertaining than the game — which the Mets lost 8-7 — as fans gathered outside the bathroom to see the off-field action. The woman did not recover her tooth, but was relieved just to leave the bathroom.
Some low-flow toilets use powerful vacuum suction to minimize the amount of water needed, but it's unlikely that contributed to the woman's hand being stuck, a Queens plumber said.
.
"The truth is, this kind of thing happens all the time — usually with wedding rings or cellphones," he said.
"People have probably been getting their hands stuck in toilets as long as there have been toilets."
In 2003, 41-year-old Edwin Gallart dropped his phone in the toilet on a rush-hour Metro-North train, and went in after it.
Railroad employees could not pry his arm loose, and it took an army of emergency personnel 90 minutes, using Jaws of Life rescue equipment, to free Gallart and his phone.
During the rescue, the track was shut down, passengers were evacuated, and dozens of other trains were delayed.
Last year, a woman in China spent two days with her hand stuck down a toilet when she tried to save a pet turtle that she had accidentally flushed.
.
3-year-old girl buys $15,600 digger on auction site
Three-year-old Pipi Quinlan bought a $15,600.00 Kobelco digger on auction website TradeMe, prompting immediate damage control by her mom when her purchase was revealed.
Most parents are used to little ones sneaking treats into the supermarket trolley, but Pipi's deal must take the cake.
Parents Sarah and Reid Quinlan, of Stanmore Bay north of Auckland, were astonished to wake one morning to find Pipi had bought the huge excavating digger in a TradeMe auction.
The technically savvy kid had woken early and, with the rest of her family sound asleep, decided to play with the computer.
With a few clicks of the mouse she entered Internet Explorer and the Trade Me site her mother had already logged on to.
After a few more timely clicks, she had won the most recent auction listed on the site's homepage.
It was for a Kobelco digger, and she had it for $15,600.00 - money she didn’t have in her piggy bank.
"The first I knew about it was when I came down and opened up the computer," says mum Sarah.
"I saw an email from TradeMe saying I had won an auction and another email from the seller saying something like 'I think you'll love this digger'."
"Well, I had a few Duplo Lego play kits on my watch-list, so just assumed I'd won a digger toy-set," she says.
"It wasn't until I went back and re-read the emails that I saw $NZ20,000, and got the shock of my life," says Sarah.
"I called my husband Reid over to make sure I wasn't seeing things.
"I asked him what a Kobelco was and he said 'I think it's an earth moving digger'."
"I jokingly said to Sarah, well you'll have to move the Honda off the driveway to make way for the Kobelco," says Reid.
..
Bank personnel blunder makes couple accidental millionaires
A New Zealand couple whose bank mistakenly paid $NZ10 million (£3,900,000) into their account have taken the money and run, and are now the subject of an international police hunt.
Huan Di Zhang and Hui Gao, who ran a service station in the city of Rotorua on North Island, had applied to Westpac bank for a $10,000 overdraft.
A blunder by bank staff meant that the couple received 1,000 times the amount they were expecting.
The accidental millionaires withdrew some of the money and disappeared, Detective Senior Sergeant David Harvey, of Rotorua police, said.
Police believed the couple had already fled overseas, and Interpol had been alerted, he said.
Local business people said that the couple had disappeared overnight.
.
Retired cop robbed New York bank
A retired New York Police Department officer robbed a bank in Huntington Station, N.Y., police allege.
Police in Suffolk County, N.Y., allege former NYPD Sgt. Thomas Feeney robbed Roslyn Savings Bank by presenting a note to a teller, threatening the use of a firearm if he did not receive cash.
Suffolk Detective Sgt. Robert Doyle said Tuesday's robbery, which ended with Feeney allegedly fleeing with an unspecified amount of money, appears to be the result of economic hardship.
"He is very heavily in credit-card debt ," the Major Case Squad detective alleged.
Police allege they arrested Feeney, an unemployed father-of-two, after a bank employee wrote down part of the license plate number of the car used by the fleeing robber.
Feeney, who retired from the New York Police Department in 1994, now faces a robbery charge.
.
Posted by The Man at 5/21/2009 1 comment:

One of a kind Beetle Van... 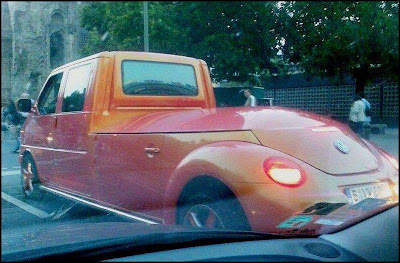 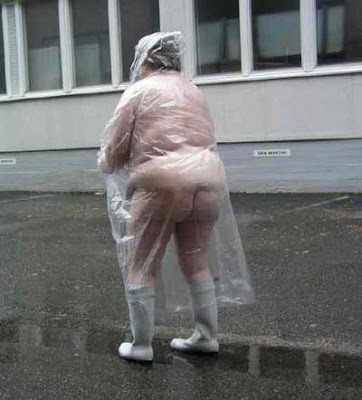 I chose not to include "ENLARGE" with this photo! For Obvious Reasons
But if you want to see more "ENLARGE HER"
.
Posted by The Man at 5/21/2009 No comments: 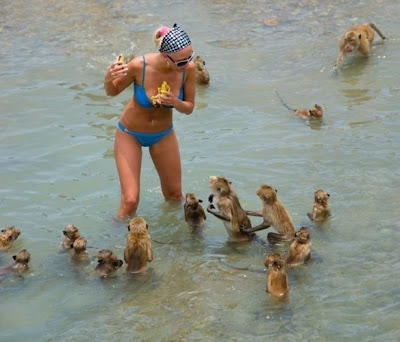 A picture of a Greylag Goose, as the bird was flying upside down. 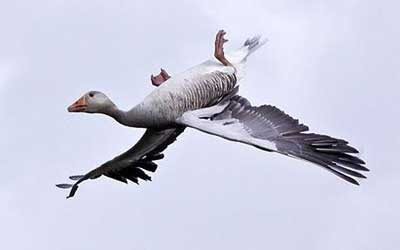 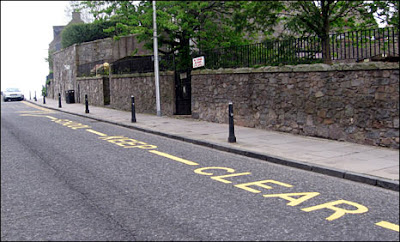 The "school keep clear" sign has been painted outside the closed nursery
A council has admitted workers painted a warning sign outside a nursery school despite it closing 10 years ago.
The yellow zig-zag "school keep clear" sign has been painted in Aberdeen at St Peter's Nursery in The Spital.
The work - costing about £200 - was carried out despite the building being boarded up.
An Aberdeen City Council spokeswoman said: "Staff have been instructed to check orders for all outstanding works to ensure they are still required."
.
Posted by The Man at 5/21/2009 No comments: 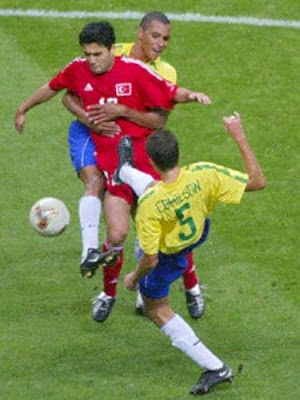 His Feminine Side Is Showing 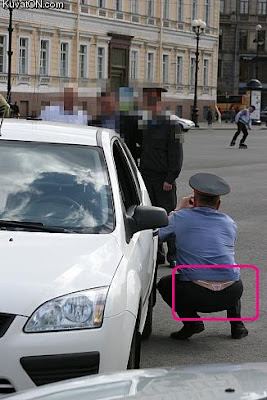 Your I.T. help desk was contracted out to the lowest bidder in Pakistan
I just got started posting and my Internet went down "DAMN MEDIACOM" 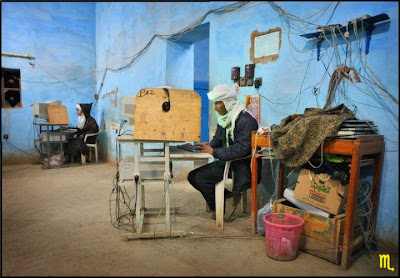