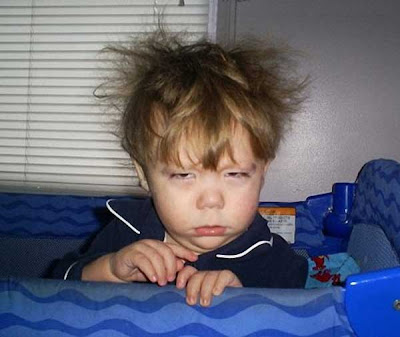 Mom scares the SHIT out of her daughter -NSFW

An "ingenious" 62kg orangutan short circuited electrical wires and climbed a fence using a makeshift ladder in an aborted escape attempt from Adelaide Zoo.
The elaborate plot by 27-year-old Karta got her to within meters of the public, and resulted in the closure of the zoo on one of its busiest days of the year.
The alarm was raised by a member of the public about 11am.
Zoo curator Peter Whitehead said Karta had twisted a stick into hot wires that encircled her enclosure, short circuiting the wires and allowing her to enter a vegetated area near the concrete and glass fence that separated her from the public.
.
.
Posted by The Man at 5/11/2009 No comments: 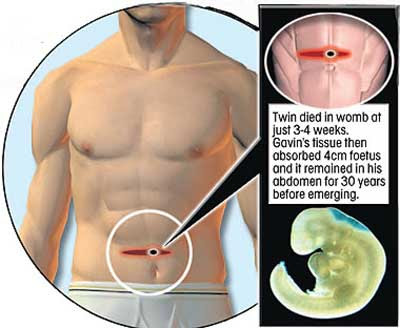 A plumber in agony as his stomach ruptured — and the embryonic remains of his twin spilled out.
The lumpy mass forced its way out after lying inside Gavin Hyatt’s abdomen since he was born 30 years ago.
In a scene echoing the horror movie Alien, Gavin staggered into his GP’s surgery bleeding from his belly button.
His stunned GP Dr Joe Santos said: "It was like something from Alien. I didn’t believe Gavin when he said something was coming out of his belly button until I saw him."
Medics said the growth was a parasitic twin — Gavin’s identical brother who died in the womb early in their mom’s pregnancy.
The 4cm foetus then became embedded in Gavin’s tissue and stayed in his stomach for the next 30 years.
There are just a handful of cases worldwide — with the majority reported in Asia.
.
Posted by The Man at 5/11/2009 1 comment:

Man has a Very Annoying Laugh

Eyes from the Sky 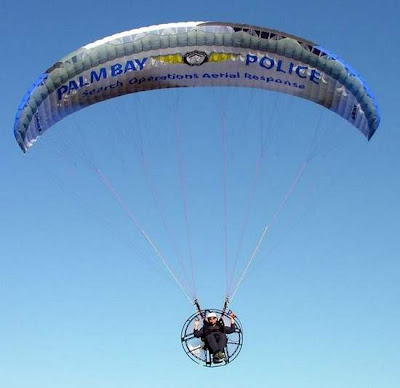 Criminals may be used to looking over their shoulders for police, but a new crime-fighting tool introduced in Florida means they will now also be looking above their heads.
Officers in the town of Palm Bay are being sent aloft on motorized paragliders to act as spies in the sky, in a first-of-its-kind mission code named Operation Soar.
Suspended beneath parachutes wearing lawnmower-style motors on their backs, they will patrol the skies looking for burglars, car thieves and missing children, equipped with radios, cameras and GPS navigation systems
The seats of their unconventional aircraft have been specially bulletproofed and the officers have standby parachutes, to protect against criminals who may be tempted to use them for target practice.
The paraglider patrol idea was hatched after hopes of launching unmanned drones to conduct aerial surveillance over Palm Bay were shot down by the Federal Aviation Administration, due to safety fears.
"Our agency is pretty innovative, we like to think out of the box and experiment with new ideas. The more we fly these paragliders, the more uses we'll find for them," said Lieutenant Joe Eakins.
The $25,000 gas-powered machines, purchased using proceeds from the sale of criminal assets, can fly at speeds up to 63mph and at altitudes anywhere between two inches off the ground and 18,000ft.
VIDEO
.
Posted by The Man at 5/11/2009 No comments:

Boy Playing 'Cops and Robbers' Shot by Deputy
A boy playing "cops and robbers" with a toy handgun has been shot and wounded by a Los Angeles County sheriff's deputy, officials say.
The boy was shot shortly Sunday night in Palmdale. Deputy Jeff Gordon says the boy was hospitalized in stable condition and is expected to survive.
His age and identity were not immediately released.
Gordon says deputies were responding to reports that someone was riding a bicycle and brandishing a handgun. They spotted the rider and ordered him to drop the weapon but instead, Gordon says he pointed it at the deputies.
One deputy fired a shot and hit the boy in the upper body.
Palmdale is about 50 miles north of downtown Los Angeles.
.
Saudi judge says it's okay to slap overspending wives
A Saudi judge said it is okay for a man to slap his wife for lavish spending at a seminar on domestic violence, according to a report from Agence France-Presse.
Jeddah judge Hamad al-Razine told the group a husband was justified in smacking his wife, using overspending on a high-end abaya, the black shroud Saudi women must wear in public, as an example, according to AFP.
"If a person gives 1,200 riyals (320 dollars) to his wife and she spends 900 riyals (240 dollars) to purchase an abaya from a brand shop, and if her husband slaps her on the face as a reaction to her action, she deserves that punishment," Razine said.
The seminar was on the role of authorities in preventing domestic violence that was attended by activists and officials, including members of the National Family Safety Program.
While the judge recognized the country's domestic violence problem, he said some of the blame must lie with the wives.
.
Women only hear properly when gossiping or eavesdropping
Women only really hear properly when they are gossiping or eavesdropping on other people's conversations, according to new research.
More than two thirds of women admitted that a gossip with friends is the only time they are properly listening to what is being said.
The same percentage think they hear most intently when they are trying to eavesdrop on an argument taking place nearby.
.
Florida woman keeps mother's dead body in house for six years
A Florida woman has been charged with fraud and theft after she kept her dead mother's body in a bedroom for six years while collecting more than $200,000 in pension benefits..
Penelope Sharon Jordan of Sebastian, Florida, was charged by a federal grand jury last week with Social Security fraud and theft, the US attorney's office in Miami said.
Police found the decaying body of her mother, Timmie Jordan, on a bed in a spare bedroom at the mother's home, when they were called to investigate a report of nuisance cats.
Miss Jordan, 61, told police that her mother had died in 2003.
The indictment alleged that Miss Jordan concealed her mother's death in order to receive both her US Social Security benefits and her military survivor's benefit.
Miss Jordan collected $61,415 from Social Security and $176,461 from the military pension during the six years, prosecutors said.
She could face up to 15 years in prison.
Local media reported that Miss Jordan told police that her mother died of old age and she kept the remains because she could not afford burial expenses. An autopsy found no signs of foul play.
.
Posted by The Man at 5/11/2009 2 comments: