A Couple Showing Off Their Assets 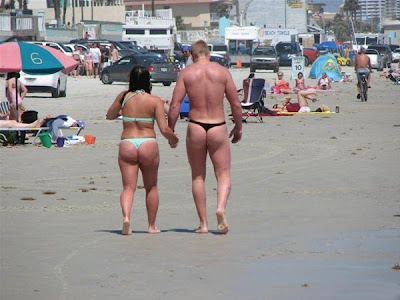 It's not just a Motorcycle, Baby. It's a Mobile Barbecue Pit.
Yes, that is a wood oven precariously close to a gas tank. But it's still awesome.
Courtesy of RUB 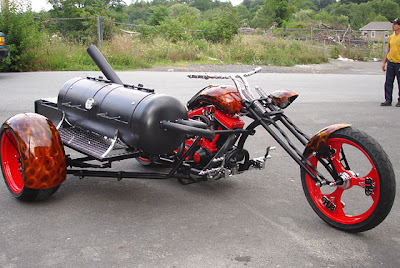 When we heard that RUB was commissioning Orange County Chopper, of American Chopper fame, to make a mobile barbecue pit, we thought it was a pretty cool idea. We expected it to be a novelty, like a two-headed kitten or the world’s largest ball of string. Nothing prepared us for the mind-numbing coolness of the actual RUB Chopper: The restaurant’s owner, Andrew Fischel, correctly characterizes as “the sickest, baddest thing in the world.”
We had some doubts, too, about the utility of the thing: Was it really that good of an idea to have what amounts to a giant wood oven inches from a gas tank? But the RUB guys have already cooked ribs, brisket, and pork butt on it, and they aren’t dead yet. When asked if it was dangerous, Fischel replied breezily, “I don’t know. No one’s ever built one of these before.”
Let’s hope we don’t find out the hard way.

Thieves switch Mexican police dog for mongrel puppy
A top police sniffer dog working for an elite Mexican drug squad was stolen during an airport transfer by thieves who left a mixed-breed puppy in its place, the attorney general's office said. Rex IV, a highly trained Belgian Malinois sheepdog with a string of drug hauls behind him, was checked on to a flight from Mexico City this week with seven other police dogs bound for an operation in the northern state of Sinaloa. But when the dogs arrived at Mazatlan airport, Sinaloa, their police handlers discovered a small black mongrel puppy inside Rex IV's cage, with the sniffer dog nowhere to be seen. "It's like kidnapping an intelligence agent", he said.

Passenger Arrested After Trying To Open Door During Flight
A passenger tried to open a plane door during a Frontier Airlines flight on Saturday morning but was subdued by airline staff and passengers, an airline spokesman said. Police and Transportation Security Administration staff met Flight 514 after the plane landed in New York City and took the man into custody, said Frontier spokesman Joe Hodas.
Click Here To Read More

Fake Calls For Aid Lead To Teenager
The teenager's mom became suspicious when she found radio equipment in his room. Equipment she hadn't bought. She called Largo police. What she didn't know was that her son, a 15-year-old Clearwater High School student, was already wanted by the U.S. Coast Guard and the Federal Communications Commission.
Click Here To Read More

81-Year-Old Fights Off Teen Robbers
A couple of Sampson County teenagers are behind bars after trying to rob a well-known hardware store in Dunn, and family members are calling the store's 81-year-old owner a hero.
He got quite a scare Thursday when a gunman tried to rob him, but Carr fought back and one of the 15-year-old teenagers fled.
VIDEO: 81-Year-Old Fights Off Teen Robbers
Click Here To Read More
Posted by The Man at 8/27/2007 No comments:

A fossilized penis bone from an extinct walrus was sold for $8,000 at a Beverly Hills auction yesterday. The 4 1/2-foot-long bone was sold to the company that runs the Ripley's Believe It or Not museums. The price will top out at $9,600 when auction fees are included. 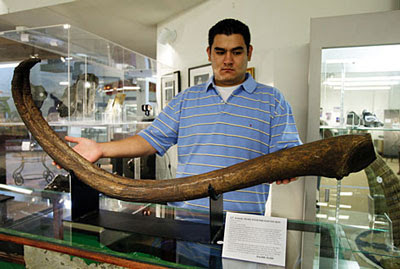 "Size matters, and the walrus has got every male beat," said Josh Chait, operations director for his family's auction house in Beverly Hills. "
It's a little sick, but where else are you going to get another one?
That's how collectors think."
The final price was well below the $12,000 to $16,000 the item had been expected to bring. The I.M. Chait Gallery says the Ripley's corporate office bought it with the intention of displaying it around the country. Discovered in Siberia, the fossilized penis bone is from a species of walrus that went extinct 12,000 years ago. The piece curves to a point and is covered with weathered skin and dry muscle tissue. The auction house said it was believed to be the largest known mammal penis fossil.
Posted by The Man at 8/27/2007 No comments:

Watch Out for that First Step it's a Doozy 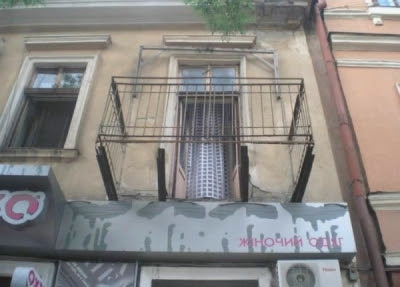