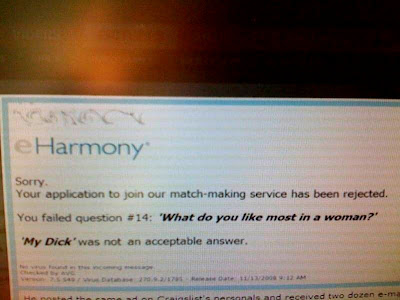 "My dick" is not an acceptable answer.
. 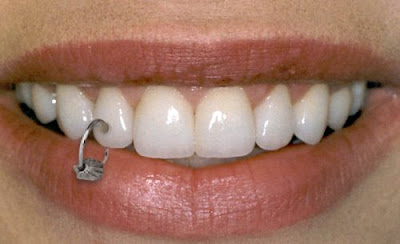 Veterinarians in Warson Woods, Mo., say they found 15 pacifiers, a bottle cap and a piece of a basketball in a 2-year-old bulldog named Lulu.
Lulu's owners, David and Jennifer Swart, said their 18-month-old daughter's pacifiers kept disappearing and they kept buying more.
When Lulu showed an interest in the pacifiers, they took her to the vet, who performed surgery last month after X-rays revealed an unusual gray area in Lulu's stomach, The St. Louis Post-Dispatch reported Sunday.
The vets saved the pacifiers, some of which had turned black from Lulu's stomach acid, to show the Swarts.
Lulu's $808 surgery cost was covered by Veterinary Pet Insurance, a California insurer that declared Lulu's case its most unusual for December after reviewing claims for dogs who ate nails, a packaged fire log, a whole turkey and several wigs.
.
Posted by The Man at 1/19/2009 No comments:

What Pedigree dogs turning into 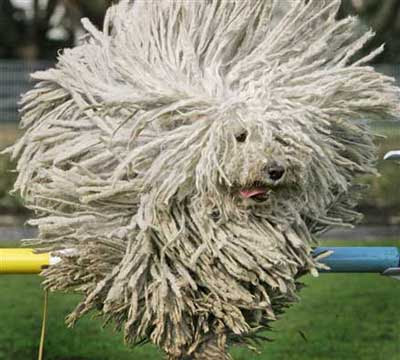 Pedigree dogs are becoming stupid as we breed them for looks, not brains
Pedigree dogs have become increasingly stupid as they are now bred for their looks, not their brains, according to new research.
Their mental and physical agility of many breeds is being eroded as owners now look for docile, pretty pets to live in their homes.
In the 19th century dogs were more likely to be selected for their strength and skills, so they were able to earn their keep guarding homes and livestock and fetching the quarry on a hunting trip.
But a significant change in breeding trends has meant the ancestors of these proud working dogs are now less responsive to commands and not as alert or attentive.
Scientists in Sweden have found strong evidence that breeding for appearance has led to a decline in intelligence.
.
Posted by The Man at 1/19/2009 No comments:

Family that does it together goes to jail

Police in St. Petersburg Florida today reunited armed robbery suspect Jaqueal Edward Harris and his parents. They arrested James and Evette Harris on charges of armed robbery, accusing the couple of driving their son to a convenience store that he's accused of holding up at gunpoint last year. Jaqueal Harris, 18, has been in the county jail since Saturday, held on numerous felony charges. 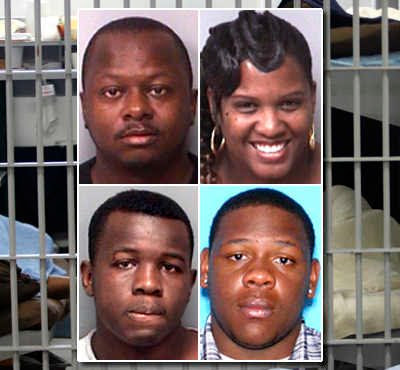 Photo: From left, top:
James and Evette Harris; bottom, Jaqueal Edward Harris, Timothy Cornell Gipson Jr.
.
Cops arrested James and Evette Harris on charges of armed robbery, accusing the couple of driving their son to a convenience store that he's accused of holding up at gunpoint last year.
The son, Jaqueal Harris, 18, has been in the county jail since Saturday, held on numerous felony charges.
Cops say the parents drove Harris and three acquaintances to the Sunshine Foods convenience store where a robbery involving a gun took place.
Not only did the parents hang around while their son helped rob the store, but they gave the alleged robbers a ride after the robbery, the cops say.
Then Jaqueal Harris paid his parents for their help using the stolen cash, police say.
But here's the really happy ending.
The kid and his parents have been reunited. In jail
.
Posted by The Man at 1/19/2009 No comments: