Man fell asleep in restroom trigger alarm
police say a man who triggered a burglar alarm at Macy’s Department Store didn't break into the store -- he merely fell asleep in a restroom and didn't leave before the store closed.
Officers were responding to the alarm Thursday night when police got another call from the man who told them of his unfortunate situation
Police located the man who had been locked in the store and verified his story. Police didn't charge the man, so they're not releasing his identity.
.
Man texts friend before burglarizing him
A western man is jailed on charges he burglarized a former high school friend's home after text messaging the victim to ensure he wasn't home.
Thirty-one-year-old James Hill, of , waived his right to a preliminary hearing and is awaiting trial on burglary and other charges. Murrysville police say this incident happened on April 4, and that they're investigating similar incidents involving at least two other former classmates at .
Police say the homeowner left work and saw Hill exiting the residence and called police after another friend saw Hill entering the home through the garage and alerted the victim.
Police say Hill pawned jewelry he stole to support a drug habit.
.

College paper goes topless for exotic dancer story
A college newspaper has gone topless to publish a story alleging a professor used exotic dancers in a business seminar.
students say administrators would not let them print the story above the fold on the front page. The top half is blank, except for the words "See below the fold."
Officials at the private have previously confirmed an investigation of the March 21 seminar.
The newspaper's executive editor, Vinny Vella, says administrators initially forbade him from printing the article at all until their investigation was complete.
They relented after the Philadelphia City Paper broke the story April 8 but issued the story-location caveat. The university's dean declined to comment.
.

Man bites police dog
A 33-year-old man who bit back after he was caught by a police dog is suing police.
Erin Sullivan alleges the dog violated his civil rights and used excessive force to capture him after he ran from officers in during a burglary investigation last year.
Police say Sullivan bit the dog back, injuring it.
The lawsuit names the cities of and and four officers.
Precursor filings to the lawsuit sought $200,000 from and $250,000 from .
Sullivan also alleges police refused to give him insulin to treat his diabetes. Sullivan's attorney, Keith Knowlton, has said his client suffered a diabetic seizure in a cell.
Officials in and have declined comment.
.
Posted by The Man at 4/16/2011 No comments:

Red-faced traffic bosses are investigating how pranksters altered a set of pedestrian lights to show a couple having sex whenever they turned green. 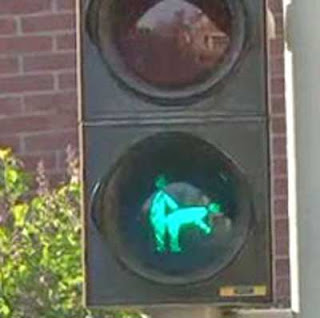 .
The lights - in Nimwegen, - literally stopped the traffic when passers by stopped to gawk at them during rush hour.
One officer said: 'People kept pressing the button to see the couple having sex and of course every time they did, the traffic had to stop suddenly. We had quite a lot of rear end shunts from drivers who were too distracted.'
.
.
Transport officials are investigating how computer hackers managed to get into the town's traffic light system to manipulate the image.
A Town Hall spokesperson said: 'We are looking at who had access and opportunity.'
.
Posted by The Man at 4/16/2011 No comments: