Man jailed for ejaculating into co-worker's water bottle
man has been sentenced to six months in jail for ejaculating into the water bottle of a woman co-worker, who unknowingly sipped from it.
Michael Kevin Lallana of was sentenced Friday following his earlier conviction on two misdemeanor counts of battery he got 180 days in jail and must register as a sex offender..
Authorities say the woman sipped from the bottle that January, noticed a foul taste and threw it out. She noticed the same taste again that April, became suspicious and sent the bottle to a lab for testing.
Police in questioned company employees and Lallana eventually confessed.
.

Bragging nabs four in bank robbery
Facebook bragging about bucks has led to four suspects accused of holding up a Houston bank.
The postings about the March 23 robbery of International Bank of Commerce were included in a criminal complaint unsealed this week. The arrests, including two bank employees, were announced Thursday.
Security video shows two armed, masked suspects robbing the bank and fleeing with about $62,000.
A tip directed law officers to a pair of Facebook pages. Federal investigators say one suspect's Facebook page boasted: "IM RICH." Another said: "WIPE MY ASS WITH HUNDREDS."
.

Woman denies biting off boyfriend's testicles
Mother of four Maria Topp, who is accused of biting off her boyfriend's testicles, has denied grievous bodily harm in a court hearing today.
The 43-year-old allegedly savaged Martin Douglas at his flat.
Mr. Douglas required emergency hospital treatment for the injuries caused.
Swas granted bail until her two or three-day trial, which will be fixed later.
In 2005, a woman who admitted to ripping her ex-boyfriend's testicle off with her bare hands after he refused to sleep with her was jailed for two and a half years.
.
Posted by The Man at 4/23/2011 No comments:

A gang member has been convicted of murder after police used the man's chest tattoo to prove his guilt.
The murder of 23-year-old John Juarez had remained unsolved since January 2004 when he was gunned down outside an off-licence in Pico Rivera, a Hispanic area 11 miles south-east of Los Angeles.
In 2008, LAPD Sergeant Kevin Lloyd however solved the case when he noticed a mugshot of Rivera 13 member Anthony Garcia. He was arrested in October 2008. Police officers then got a confession when they posed as gang members in his jail cell and listened to Garcia brag about the shooting.
In the mugshot, a bare chested Garcia, 25, displayed his elaborate tattoo, which was effectively a retelling of the murder scene.
. 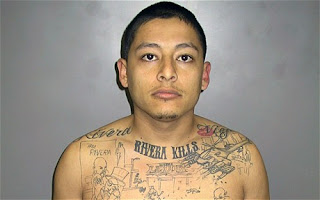 Click to Enlarge
.
The body art included the scene outside the off licence, Mr Ed's Liquor, the words "Rivera Kills", in ference to the gang, and an illustration of a helicopter firing guns at the victim, who was depicted as Mr. Peanuts. Garcia's nickname is "Chopper", while belonged to a gang called Pico Nuevo, nicknamed "peanuts", but rival gangs.
Garcia is due to be sentenced next month. Mr Lunsford said he potentially faces 65 years to life in prison.
.
Posted by The Man at 4/23/2011 No comments: