Skirts Only On Sunday No Trousers
Men living on a tiny Fijian island have been ordered to wear a skirt instead of trousers on Sundays to avoid offending God.
The Methodist Church on Bua island has ruled that men must wear the traditional island sarong, called a sulu, on Sundays to learn to respect the significance of the holy day.
Families cannot travel on any motorized transport or do any form of work, including hanging out clothes to dry.
"The ban is meant to bring good luck to the island as we respect the day of the Lord," he said.
"You can see that often misfortune befalls us because we don't respect His commandments that there be no work performed on Sunday except worship."
He said that since the ruling was made, clothes lines on the island had become full on Saturdays and people had stopped traveling offshore in boats fixed with outboards.
"But we make exceptions during emergencies for the sick so it's not a ban that hasn't been well thought out," Mr Baleinasiga told the newspaper.
But it hasn't been a hit with everyone.
A villager who wished not to be named said the ban was "too restrictive".
"We can't understand how wearing a sulu vakataga on Sunday will help us forge closer relations with the divine," he said.
"At times too for the school children who come home for the weekend, the best time to return to their hostel in Labasa or Savusavu is on Sunday - so that is getting in the way."
.
Man arrested for drive-by fecal matter attack
A 39-year-old construction worker has been arrested for throwing his own feces at women passers-by from a motorcycle in two separate attacks in western Japan, police said today.
The man turned himself in yesterday after making the second drive-by attack in Settsu, a satellite city near Osaka, and was detained on suspicion of assault, a municipal police spokesman said.
The worker, identified as Tatsuya Moriguchi, committed a similar assault in the same city on August 3, the police official said.
"The suspect has told investigators he did it because he felt frustrated when his work didn't go well,'' the official said.
"I have no idea what kind of penalty he may face. I have not heard about such a case before.''
In the first incident, Moriguchi relieved himself outdoors just before getting on his moped and throwing the feces at the head of a woman in her 20s, the official said.
.
'Pay €10 and then you will get your lost purse back'
A young girl who lost her purse on a Ryanair flight, was shocked when she was forced to pay €10 for its return.
Emma Lally, nine, misplaced her purse while buying presents on a flight home to Dublin from Spain.
Although her father Sean Lally was able to track down the purse after a series of phone calls to Dublin Airport, Emma was left in tears after being told she must pay €10 (£8.50) to reclaim it.
Ryanair uses lost property provider Greencap, which charges a €10 administrative fee.
Dublin Airport Authority charges €6 to reclaim lost items.
Mr Lally was grateful that Ryanair staff had handed in his daughter's purse but is still fuming over the charge, particularly when it involved a child.
'I was a bit annoyed that I had to pay back money for something that was ours,' Mr Lally told the Belfast Telegraph.
'I was delighted to get it back, but she's only a child.'
Emma had written her personal details inside the purse, which contained €42 in cash which she had saved from her holiday spending money.
Mr Lally said: 'Her name and address were written inside the purse in a child's handwriting. It was very obvious that it was a child's purse. She's a good kid and she went away and had a little think about it, and came to me and said she wanted to give me the money. 'Emma was delighted to get it back but she couldn't believe that she had to pay the money. I don't see why it can't be given back without a charge.'
.
Posted by The Man at 8/19/2009 2 comments: 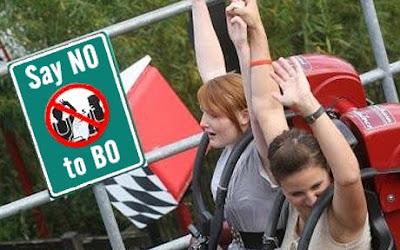 Thorpe Park is banning visitors from putting their hands in the air while riding its roller coasters following complaints about body odor.
The new rule will apply at the theme park in Chertsey, Surrey, from Wednesday and signs will tell visitors to keep their arms down and 'Say no to BO'.
With temperatures expected to reach 84F (29C), managers expect an excess of perspiration as visitors queue to go on rides.
Wardens on the rides will also remind people to consider their fellow passengers and anyone ignoring the warnings will be escorted off. Those who continue to do so will be asked to leave the park.
Mike Vallis, a director at Thorpe Park, said: "We've found that when the temperature tops 77F (25C) the level of unpleasant smells can become unacceptable and we do receive complaints.
"Our rides are really scary and people tend to sweat more than normal due to the fear and anticipation they experience while queuing up so it can get really pongy. Therefore, we felt a ban in temperatures of 25C plus would be the best way to ensure our guests have the most enjoyable experience and aren't exposed to any unsavory armpits."
.
Posted by The Man at 8/19/2009 No comments: 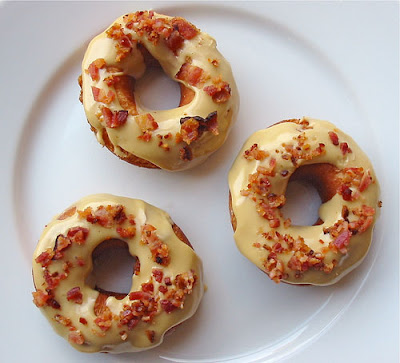 Bacon Doughnuts
There’s just something about this salty, smoky, crispy, fatty, forbidden treat that elicits a drool factor no other food can equal. In recent years, food bloggers have taken bacon to new heights, helping us see how this beloved breakfast meat can be incorporated into nearly every dish imaginable. It’s been bacon for breakfast, lunch, dinner, and drinks.
.
100 Ways to Use a Strip of Bacon
.
Posted by The Man at 8/19/2009 No comments: 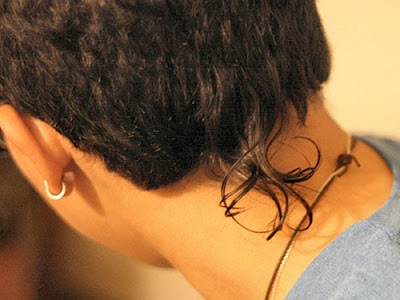 Time to throw away your bearskin rug!

"Human Skin Rug no Home Should be Without." 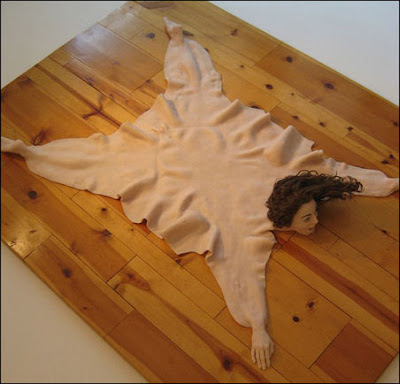 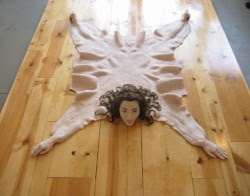 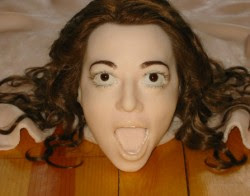 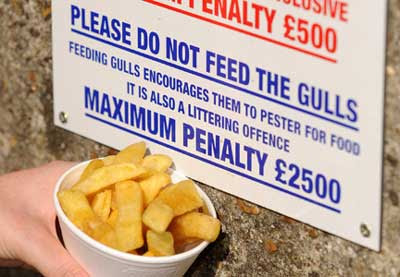 New signs put up in the popular seaside resort warn people that they could be slapped with a £2,500 fine if they feed the gulls.
Town leaders say the move has been introduced to combat the nuisance caused by the big birds which hungrily scavenge for leftover food given any opportunity.
Jimmy Robinson, chair of the town appearance committee of Aldeburgh Town Council, and the former mayor, said: "People complain very bitterly about the seagulls and the more people feed them, the more they come."
They are certainly getting more sure of themselves, they sweep down and take food out of people's hands.
.
Posted by The Man at 8/19/2009 No comments: 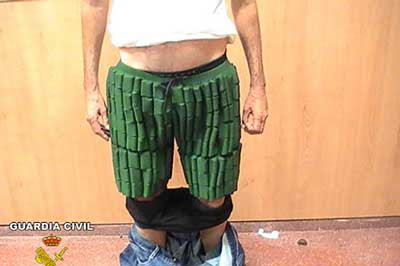 Customs officers arrested a smuggler with six and a half kilos of cocaine hidden in his shorts after becoming suspicious of his big butt.
Officials at El Prat de Llobregat airport, Barcelona, forced him to strip and found specially made pants with dozens of tiny pockets sewn in to hold the drugs.
The green neoprene pants contained more than 160 pockets for canisters of cocaine.
Drugs investigators were determined to get to the bottom of it when they noticed the smugglers huge backside as he waddled through the airport.
"He wasn't a big man but he has a very bulky rear end and was walking very strangely," said a spokesman.
"Then we saw that whenever he sat down it was like he was sitting on eggshells.
"His backside and his legs looked like they belonged to a weightlifter. We've seen all sorts of stunts but the big pants were a first for us."
.
Posted by The Man at 8/19/2009 No comments: