Woman trashes McDonald's because she didn't like her hamburger

Police are looking for a woman who went on a rampage at a McDonald's in Kansas City, Missouri, because she didn't like her hamburger.
Police say the woman caused thousands of dollars in damage when she became upset that the restaurant wouldn't refund her money.
Police say the woman is facing criminal damage charges after she got upset over her hamburger at McDonalds and threw a bucket of water, cookies, a sign and three cash registers over the counter. (Jan. 5)
.
.
Posted by The Man at 1/08/2010 No comments: 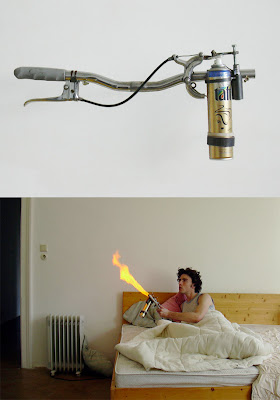 In Russian village they are having fun sometimes in some exotic way. The traditional washing places called “banya” were a must near every villager’s house. But still there are some that don’t have a banya and now the local entrepreneur Sergei has invented a mobile banya, village style. He got an old “Belarus” tractor and equipped it with a real life wooden hot steam banya house. Now such steamy delight is available by call delivered directly to your backyard or you can even to travel across the village while bathing and then can jump out to the virgin snow of the village outskirts. 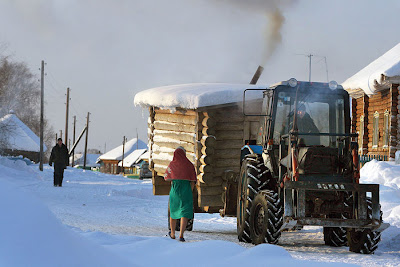 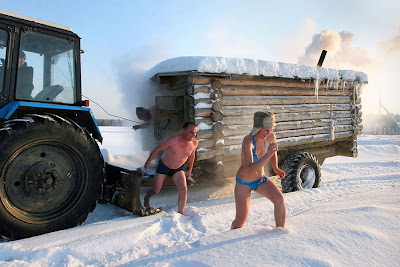 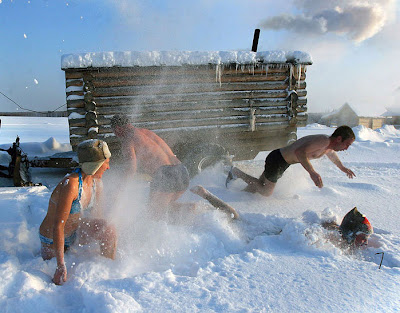 Two girls, believed to be aged 12 and 14, are being hunted by police over a bank robbery.
The young girls walked into a branch of 1st National Bank in Cincinnati, Ohio and handed a note to the cashier demanding money.
According to police the note implied the girls would harm employees if the money was not given to them. They did not appear to have any weapons.
Staff complied and the girls walked out with a bag full of money. They then evaded an extensive police search which included a helicopter and sniffer dogs.
.
.
Posted by The Man at 1/08/2010 No comments:

Man crashes into cafe, orders breakfast
A 91-year-old man who crashed his car into a popular Florida restaurant proceeded to sit down and order breakfast near his vehicle, authorities said.
Tonya Gilardi, a spokeswoman for Port Orange Fire, said Charles Pierce was not injured when he crashed his car into the Biscuits 'N' Gravy restaurant at 11:11 a.m. Monday, but another customer was treated for minor injuries at Halifax Health Medical Center in Port Orange.
"A firefighter told me he sat down and ordered breakfast right after the crash," Gilardi said of Pierce. "He sat close to where the crash occurred so he could keep an eye on his car."
.
Naked jogger nabbed near White House
Secret Service officials in Washington said a naked jogger was arrested near the White House and a suspicious package was found to be his clothes.
Malcolm Wiley, a spokesman for the Secret Service, said the man apparently shed his clothes at about 5 p.m. Wednesday and left them in a bag near an intersection while he jogged.
"He wasn't yelling or protesting, just going for a jog," Wiley said. "He was apprehended, naked though he was."
Wiley said the bag was initially considered a suspicious package but investigators determined it contained only the man's clothing.
.
County cracks down on bikini baristas
A Washington State County has passed new regulations requiring baristas at coffee stands to strip down no further than their bikinis while at work.
The strengthened lewd conduct ordinance in Snohomish County came after neighbors of numerous coffee stands complained about bikini-clad baristas in nothing but thongs and pasties flashing customers and simulating sex acts in public view.
Servers at some coffee stands that follow the revealing clothing business model complained the new regulations will reduce their clientele.
Workers at Lady Bug Latte said they expect customers to flee across the street to the Cowgirls Espresso, which is located in King County and therefore not subject to the new rules.
"I mean, guys will drive here, take one look at us, and look us up and down. Then we'll watch them go across the street, and you know that's all they want," barista Tristina Lochmann said.
Some cities within the country, including county seat Everett, are exempt from the strengthened regulations due to local ordinances
.
Swiss court fines millionaire $290,000
A Swiss millionaire has been handed down a record speeding fine of $290,000 (£180,000) by a court.
The man was reportedly caught driving a red Ferrari Testarossa at 137km/h (85mph) through a village.
The penalty was calculated based on the unnamed motorist's wealth - assessed by the court as $22.7m (£14.1m) - and because he was a repeat offender.
It is more than double Switzerland's previous record speeding fine - handed to a Porsche driver in Zurich in 2008.
In the latest case, the motorist was clocked speeding 57km/h (35mph) faster than the limit, according to the cantonal court in St Gallen, eastern Switzerland.
"The accused ignored elementary traffic rules with a powerful vehicle out of a pure desire for speed," the court said in its judgment.
Swiss media reported that the man owns a villa with five luxury cars, including the Ferrari.
.
Man steals $50, flees on Wal-Mart scooter
A Pennsylvania man in a hospital gown stole $50 from his ex-girlfriend at Wal-Mart, and then tried to flee on a store-owned motorized shopping scooter.
Thirty-two-year-old Craig David Jr., of Smithfield, was charged Wednesday with robbery and disorderly conduct.
State police Cpl. Chuck Frey says David had just been released from a hospital for injuries in a domestic dispute Jan. 1. Frey says David had been hit with a frying pan and table leg.
David was still in a hospital gown Tuesday night when he met an ex-girlfriend who agreed to pay for his prescription medication. Instead, police say he grabbed $50 from her and scooted away.
.
Posted by The Man at 1/08/2010 No comments: