Woman fights off killer python only using her hands

A WOMAN determined not to let her kitten become the second victim of a hungry python broke her wrist and was bitten twice as she fought off the large snake.
Ruth Butterworth, 58, of Bridgeman Downs on Brisbane's north side, said that as her mother's cat had been crushed to death days earlier, she knew she had to act to stop her kitten, Tuffy, from suffering the same fate. 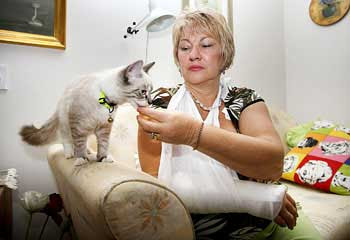 "It was almost dark and I had been calling Tuffy, but the kitten playfully ran back and forth in front of the fence before the snake struck. "I just started punching the thick part of the snake where it was about the size of my arm," Ms Butterworth said. "I wasn't looking, I just kept punching until it let go." The snake bit Ms Butterworth twice before it released Tuffy, who ran indoors. It wasn't until Tuffy was safe and Ms Butterworth fell backwards to get away from the snake that she realized she had broken her wrist and been bitten. Days earlier Ms Butterworth's mother found her cat, Coco, dead, crushed by the same snake.
Posted by The Man at 3/12/2008 No comments:

BLUtube is powered by PoliceOne.com
Posted by The Man at 3/12/2008 No comments: 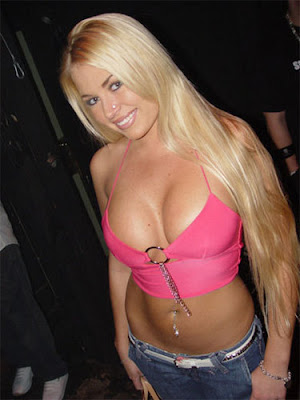 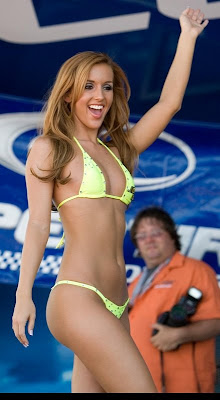 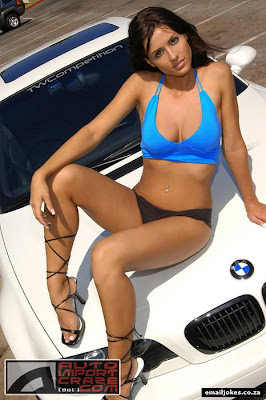 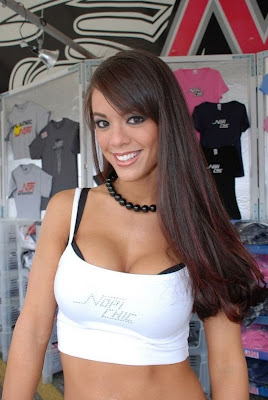 A Florida man who made a deer his pet is being pressured to set it free because it is against the state's law to keep the animal.
Deer hunter Lee Powell never expected to fall in love with a deer, but that's exactly what happened. "I love that rascal," Powell said about his pet deer Bucky. "His mama was lying along the roadside dead. I seen something moving and this little fella was lying right beside her," Powell remembered.
.
.
Even though the community treats Bucky like a star, at least one neighbor wasn't a fan. They reported Bucky to Florida Fish and Wildlife, who informed the Powells they were breaking state law.
But state law says that citizens can't buy a permit to have deer as pets and cannot transport wild animals, so the gates at the Powell home must be kept open for Bucky to roam free. That is what he's been doing for five weeks, but he always comes home.
Posted by The Man at 3/12/2008 No comments:

Been Better Off Not Seen This 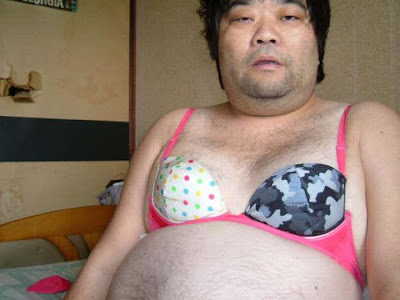 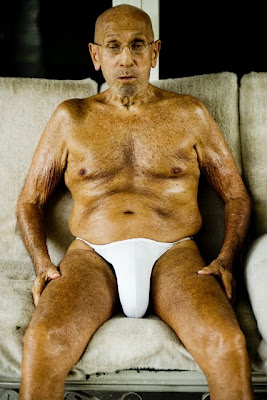 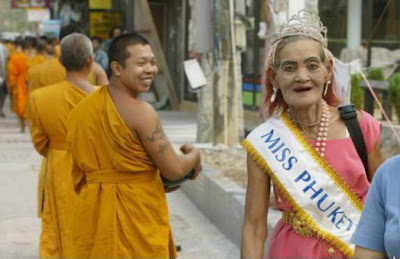 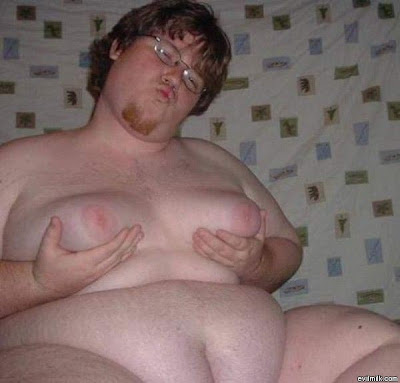 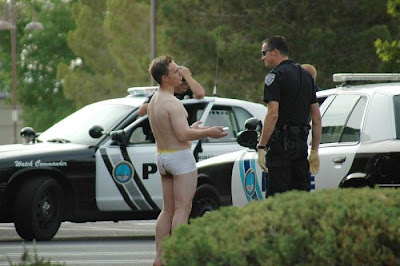 It's not coming fast enough for me. 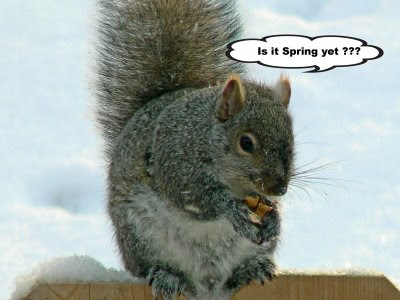 Ready or not here it comes 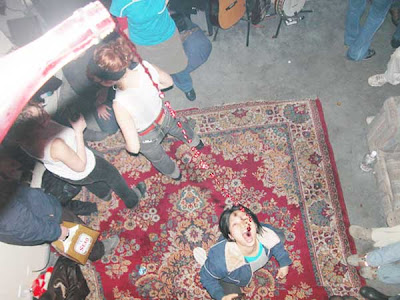 Home security camera captures the guy peeing.
Posted by The Man at 3/12/2008 No comments:

Pembroke Pines, Florida 01-14-2008
Two puppies, priced at $1,000 each, are safe and sound after being abducted from their cages at a Pembroke Pines Petland store.

The women made a dash for the door while cradling the Dachshund and Shih Tzu puppies in their arms.

Deer urine prank makes students ill
Investigators are searching for whomever poured deer urine into an air conditioning unit at a school in eastern Tennessee. About a dozen students became ill after the prank at Volunteer High School in Church Hill.
Firefighters were sent to the school Monday after the odor became overpowering in one classroom, and paramedics treated students who complained of headache and nausea.
Church Hill Police Chief Mark Johnson says the stunt could result in a vandalism charge.
Deer urine is sold by the bottle to be used to attract the animals for hunting.
.
Man clinging to boat: Save my dog first
Life jackets are made for people, not dogs. So, when Randy Earl's small boat capsized while he was fishing with his dog Lacy, a black spaniel mix, he stayed in the water with his life jacket while making sure Lacy was OK.
"When the boat flipped over, I put the dog on top of the boat," Earl told The Dominion Post of Morgantown.
While waiting for someone to rescue them on Mason Lake in northern West Virginia, Earl clung to the 12-foot boat's hull. The water temperature was about 50 degrees, said J.M. Crawley, a senior conservation officer for the Division of Natural Resources.
Another fisherman, Jan Thorn, watched from shore as a state trooper paddled out to rescue Earl and Lacy.
"He asked the state trooper to take the dog first," Thorn said. "It was very touching."
Earl, 53, said Lacy means a lot to him and his wife since they lost both of their children in a car accident 15 years ago.
"That dog is like a child to us," he said.
.
Mary Ann of 'Gilligan's Island' Caught With Marijuana in Car
DRIGGS, Idaho — Perhaps they should have called her Mary Jane.
A surprise birthday party for Dawn Wells, the actress who played Mary Ann on "Gilligan's Island," ended with a nearly three-hour tour of the Teton County sheriff's office and jail when the 69-year-old was caught with marijuana in her vehicle while driving home.
Wells is now serving six months' unsupervised probation for the crime. She was sentenced Feb. 29 to five days in jail, fined $410.50 and placed on probation after pleading guilty to one count of reckless driving.
Gilligan said... Not poor innocent little Mary Ann
.
Arizona Boy, 10, Escapes Rabid Mountain Lion Attack With Only Scratches
PHOENIX — A rabid mountain lion attacked a 10-year-old boy north of Phoenix, scratching the child on the back before being shot to death.
A biologist with the Arizona Department Game and Fish says the boy suffered scratches on his back but wasn't seriously injured during Saturday's attack.
But biologist Randy Babb said Monday that the boy will have to undergo a series of shots after being exposed to rabies.
Game officials have also recommended shots for other people who touched the lion. Someone who was with the boy shot the animal.
Babb says it's not common to find large animals like mountain lions infected with rabies.
.
City being sued for handcuffing a 4-year-old
The parents of two Bronx preschoolers are suing the city, charging that their kids were tossed out of class - and handcuffed by a school-safety officer - for refusing to take a nap.
Lawyer Scott Agulnick said Jaden Diaz and Christopher Brito - both then 4 and students at CS 211, The Bilingual School - told their parents that a substitute teacher took them and another boy to an empty classroom on Nov. 17, 2006, and left them there alone.
Soon, the lawyer said, the school-safety officer entered the room, cuffed the boys' wrists - and further terrified them by telling they that they would never see their parents again.
Posted by The Man at 3/12/2008 1 comment: