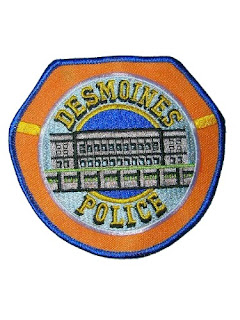 It took some kind of nerve to pull off a recent theft - from the Fort Des Moines Correctional Facility.
A thief absconded with a flat-screen TV after attending a program at the Des Moines facility for former prison inmates.
He nearly got away with the crime by using the cover of budget-induced darkness.
Authorities believe a man took the TV, valued at $400, from a dark conference room at the prison facility.
Two men initially avoided detection because budget cuts have left the prison short-staffed. The conference room surveillance cameras did not spot them because lights had been turned off to save money.
However, other surveillance cameras recorded Aaron Jefferson, 26, and Kareem Abdul-Jabar Sanders, 29, checking door handles in the building.
The Des Moines men attended a rehabilitation class at the facility Friday evening. The TV disappeared after that.
Officers raided Jefferson's residence and found the TV, Kreamer said. Jefferson admitted he had taken the TV, police said.
"Stealing from a correctional facility, we don't see that every day." Des Moines Police Det. Dave Smith said.
.
Posted by The Man at 2/04/2010 1 comment:

The snake that’s hooked on cigarettes

You don't want to deny his morning cigarette - he's guaranteed to throw a hissy fit. 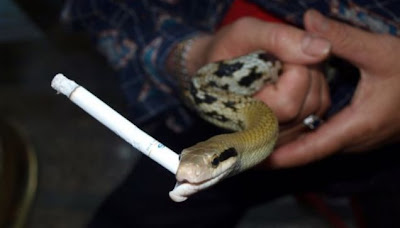 As their owner lay dead for 2 1/2 weeks, fourteen (14) starving Chihuahuas began
Fourteen starved Chihuahuas are receiving veterinary treatment after being found in a home where the owner had died. Three of the dogs are in critical condition.
Police say the elderly homeowner had been dead for about 2 and a half weeks, apparently of natural causes.
The dogs were stuck inside that home without food or water.
"This is a very sad situation where you have animals that rely on an owner to care for them, and when they decease like that and no one knows about it they're on their own," says Stacie Dabolt, an AHS Animal EMT.
"They are alive and in the condition they are because they were eating off of their owner's corpse. Sad to say but that is reality of what we deal with."
Eight other Chihuahuas didn't survive. Their bodies were found inside the home.
The living animals were taken to the AHS Sunnyslope facility to be evaluated. One Chihuahua weighs only 5 pounds -- less than half of what he should weigh.
.
.
Posted by The Man at 2/04/2010 No comments: 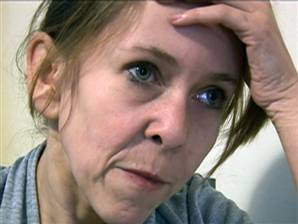 Zara Hartshorn has lipodystrophy, which makes her look old before her time
For some folks, turning 50 can trigger a midlife crisis. But due to a cruel blow of nature, Zara Hartshorn is forced to deal with it at the tender age of 13.
Though barely a teen, Zara has the appearance of a 50-year-old, something that saps her confidence just when most young people are striving for self-esteem. The Rotherham, England, teen suffers from lipodystrophy, a syndrome that causes the supporting fatty tissue under the skin to crumble even while the skin continues to grow, often at an alarming rate.
The hereditary condition is extremely rare — only about 2,000 people around the world have it — and for Zara, it has devastating social effects.
.
Posted by The Man at 2/04/2010 No comments:

The principal of Litchfield Elementary School has been put on administrative leave after a letter he wrote as a joke commenting on their children's math skills apparently found its way to parents.
Principal Ron Sterr apparently distributed the letter to teachers last week as a joke -- but one teacher who thought it was real sent it home to parents of her second grade class.
The letter read in part: "The math we do is really easy. If your child is either too lazy or too stupid to finish it in class, I'm sending it home so that you can work with them and judge for yourself whether it is laziness or idiocy that inhibits your child's progress."
The principal was put on administrative leave following a flood of phone calls from outraged parents, and is pending further disciplinary action.
.
Other parents think the district is blowing the letter out of proportion.
.
.
Posted by The Man at 2/04/2010 1 comment:

Female suicide bombers wearing Explosive Breast Implants
Authorities alarmed by possibility of surgically placed bombs
Agents for Britain's MI5 intelligence service have discovered that Muslim doctors trained at some of Britain's leading teaching hospitals have returned to their own countries to fit surgical implants filled with explosives, according to a report from Joseph Farah's G2 Bulletin.
Women suicide bombers recruited by al-Qaida are known to have had the explosives inserted in their breasts under techniques similar to breast enhancing surgery. The lethal explosives – usually PETN (pentaerythritol Tetrabitrate) – are inserted during the operation inside the plastic shapes. The breast is then sewn up.
Similar surgery has been performed on male suicide bombers. In their cases, the explosives are inserted in the appendix area or in a buttock. Both are parts of the body that diabetics use to inject themselves with their prescribed drugs.
.
Thieves swipe Twinkies, leave tracks in snow
It also included cupcakes, Twinkies and other snack cakes from the Merita Bread Company.
A report from the Sullivan County Sheriff's Office in reporting 34-year-old James M. Denoon and 18-year-old Anthony Stout were found hiding under a truck at the bakery late Friday night.
The deputies found about $300 worth of stolen snack cakes stacked on the ground nearby.
Finding the accused thieves was easy: The deputies only had to follow their footprints. There was more than an inch of snow on the ground by Friday night.
.
Teen-On-Teen Girl Fights Sweeping Internet
More Than 267,000 On YouTube
.
Virgin auctions herself for tuition
.
Unruly passenger blames pot cookies
A man claims he was high on a double dose of medical marijuana cookies when he screamed, dropped his pants and attacked crew members on a cross-country flight.
.
Man busted for trying to pat and kiss a police drug dog.
.
The 6 Weirdest Things Women Do to Their Vaginas
What the hell is vaginal rejuvenation? Who would want their vagina bleached? Here's a list of the strangest ways to make your genitals meet the demands of the beauty industry.
.
Miracle spray-on glass
Invisible film repels dirt, kills bugs and makes cleaning easy
.
Police don’t attend every 999 emergency call
. 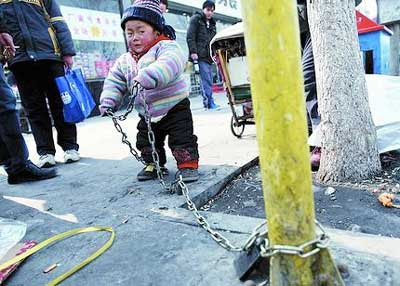 Dad Chen Chuanliu has told how he chains his two-year-old son to a tree while he's working because he can't afford a nursery place for him.
The rickshaw cyclist, from the Chinese capital Beijing, decided to put tot Lao Lu under lock and key after his four-year-old daughter Ling went missing last month.
Child snatching is rife in China where strict laws govern the size of families.
"My wife is ill and I can't stop work. So I chain him to a pole when I have a fare. It seems harsh but it is better than losing him," said Chen.
.
Posted by The Man at 2/04/2010 No comments:

Ultrasounds Can Detect Hundreds of Deformities, But Not Babies Missing Eyes
When Taylor Garrison gave birth in October, she was astonished that doctors whisked her daughter, Brielle, out of the delivery room without much explanation.
"They took her out of the room, and they wouldn't let us see her," said Garrison, 15, of Wellington, Fla.
Finally, after six hours of tests, Garrison got to look briefly at her baby and see what doctors were so concerned about.
"She looked like a normal baby, but I could just tell something was wrong," Garrison said.
Brielle was born without any eye tissue at all, a condition called anophthalmia that leaves a person irrevocably blind.
Garrison also learned this rare diagnosis was one that is almost always missed by ultrasound -- even though hundreds of genetic diseases and deformities once discovered at birth can now be detected with the latest ultrasound technology.
.
.
Posted by The Man at 2/04/2010 No comments: