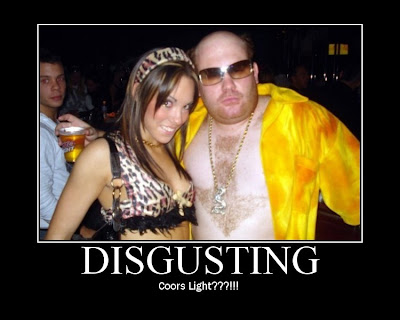 Go to the end of line

A young guy goes to the Job Center in Charleston, W. Va., and sees a flyer advertising for a Gynecologist’s Assistant. Interested, he wants to learn more. "Can you give me some more details?" he asks the clerk.
The clerk pulls up a file ad says, "The job entails getting ladies ready for the gynecologist. You have to help them out of their underwear, lay them down and carefully wash their private regions, then apply shaving foam and gently shave off any hair, then rub in soothing oils so they’re ready for the gynecologist’s examination. There’s an annual salary of $55 thousand, but you’re going to have to go to Charlotte, North Carolina. That’s about 250 miles from here."
"Oh, is that where the job is?" the young man asks.
"No, sir: that’s where the end of the line is right now."
.
Number 5,000
Posted by The Man at 11/20/2008 No comments:

What a Ugly Vehicle 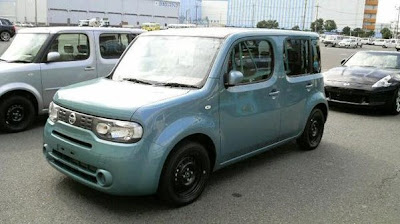 The 2010 Nissan Cube, bound for US sales and an LA Auto Show, has been revealed in these pictures of a car transit to somewhere in Japan posted on the Motive Mag forum. The new Cube retains its asymmetrical look while at the same time managing to look a bit sleeker than its predecessor. The grille shrinks a bit and the headlights get a more high tech look. The roof goes from pure flat to a slight curve and the rear of the vehicle retains the same backwards "S" sweeping across the glass from the rear door.
.
Jazib said...
With gas prices fluctuating this will be the SUV (Small Ugly Vehilce) of the next generation.
.
Posted by The Man at 11/20/2008 No comments:

Another Reason Not To Smoke

The guy was smoking, then he threw away the cigarette out the window, but the wind blew it right back inside the car. 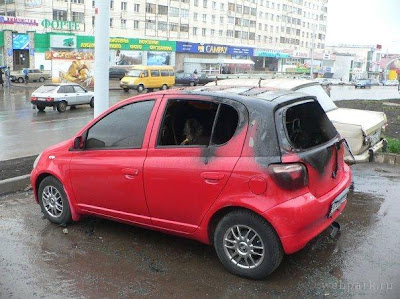 Other wise don't smoke and drive 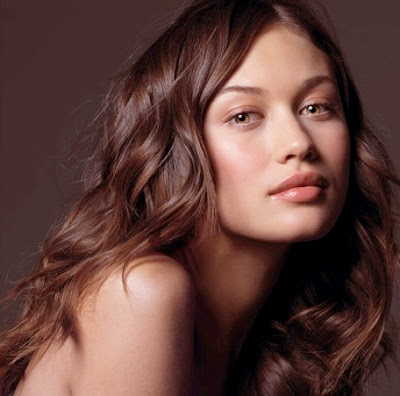 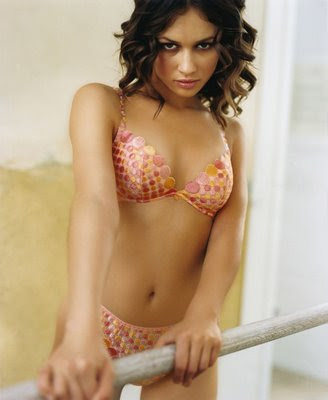 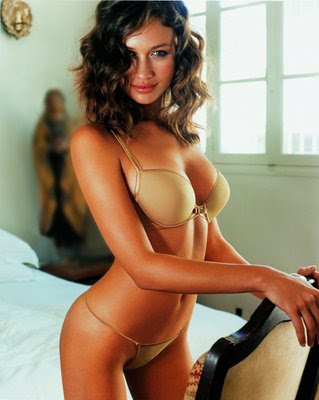 Anonymous said...
If this is the new Bond girl, she looked better in the movie than in these pics.
.
Hell.- said...
yes pleeeeeeeeeeeeease.
.
Well anonymous someone still think she's hot.
.
Posted by The Man at 11/20/2008 No comments:

Ind. inmates sneak through ceiling to have sex
Three male and three female inmates at a southern Indiana jail face charges that they devised a way to sneak between cell blocks to help pass their time behind bars by having sex.
The inmates figured out how to remove metal ceiling panels in the Greene County Jail and used the passageway more than a dozen times in September and October, according to court documents.
The men - ages 44, 38 and 17 - and the women - ages 27, 26 and 21 - crawled through the ceiling after midnight, having sexual encounters and drinking homemade alcohol that was found hidden in the male cell block, a police affidavit said.
.
Driver loses control after sneeze, hits river
An untimely sneeze nearly cost Andrew Hanson his life. The 42-year-old Weymouth man told authorities that a sneeze caused him to lose control of his pickup on Soldiers Field Road and plunge into Boston's Charles River on Tuesday.
Hanson was able to wade to shore after escaping from the truck, which was partially submerged in 4 feet of water. He was not seriously injured but was taken to a hospital as a precaution.
Lawrence Callahan of the Massachusetts Department of Conservation and Recreation said Hanson told him that after he sneezed, "the next thing he knew he was in the river."
.
Washington prisons settle lost penis case
A man who said a bad diagnosis caused him to lose his penis and a testicle to flesh-eating bacteria while in prison has won a $300,000 settlement from Washington state.
A man who said a bad diagnosis caused him to lose his penis and a testicle to flesh-eating bacteria while in prison has won a $300,000 settlement from Washington state.
Charlie Manning, 61, who now lives in a motor home near Lake Cushman on the Olympic Peninsula, expects to net about $115,000 this week after paying lawyer costs and other bills.
.
Pasta jar penis man chased by police
A man has been fined after he was caught by police in his car with his penis in a pasta jar.
Keith Roy Weatherley, 46, was spotted acting suspiciously in his car by police near Nobbys Beach in Australia.
When he saw the officers, Weatherley pulled away and led police on a 20kph chase which lasted up to ten minutes. When he finally stopped the vehicle, he refused to exit the car, and officers used batons and spray to remove him. They found him with a 750ml pasta jar around his penis.
While they were trying to restrain him, Weatherley continued to pleasure "himself in between bouts of wrestling".
Police found a number of items in the car, including pornography, a home-made sex aid, women's stockings and a Jack Russell terrier.
.
Sex offender charged with flashing lewd sign
A 32-year-old registered sex offender was charged Wednesday with holding a sign in view of a school bus asking if the students onboard wanted to see his genitalia. According to court documents, the Millcreek man pulled his Jeep along side the bus on Nov. 10 near 4800 South, held up the sign that stated, "Do you want to see my penis?" and began reaching into his pants. At least seven Murray High School students saw the sign. Police later identified the man as a registered sex offender. He was charged with seven counts of lewdness by a sex offender. All are class A misdemeanors.
.
Texas Teacher Arrested for Giving Topless Photo to Boy, 14
A 27-year-old woman has been arrested on charges of distributing harmful material to a minor after a 14-year-old's parents found a topless photo of her on his cell phone.
Victoria Ann Chacon, a former middle school teacher, allegedly met the boy at their church, where she was a Sunday school teacher. Authorities at Somerset Independent School District said they found no evidence of any inappropriate relationships with students; the 14-year-old attended school elsewhere.
The boy's parents called police in March after finding racy letters in which Chacon professed her love. The boy initially refused to give a statement about the relationship, the arrest warrant says.
Several months later, the parents found a cell phone with a topless photo of Chacon. The phone was owned by Chacon and the two had been calling on another, according to court documents.
.
Student Could Be Charged for Hugging Social Worker
A junior high school student could be charged with sexual battery after allegedly giving a school social worker an "inappropriate" hug.
The employee at Chisholm Trail Junior High School told an assistant principal that the 13-year-old boy embraced her in a way that made her uncomfortable, according to police in Olathe, Kan.
A school official contacted the boy about the incident and then released him to his parents, but the local prosecutor is weighing whether to file charges.
.
Posted by The Man at 11/20/2008 No comments: