Chick Crashes Down Flight of Stairs

.
Chick Drops Barbell On Her Head

Brazil boy needs more needles removed from body
Doctors in Sao Paulo will remove four of the five sewing needles remaining in the body of a 2-year-old Brazilian boy, who was stuck by his stepfather in an alleged plot to spite his wife.
Ana Neri Hospital spokeswoman Susy Moreno says doctors will operate to remove needles from the boy's underarm, thorax, abdomen and thigh.
Of 31 needles found in the toddler's body, only one will be left after Monday's surgery, doctors said. A needle in the boy's pubic bone does not cause any danger to his life.
Police have formally accused the boy's stepfather, Roberto Carlos Magalhaes, and his lover of attempted murder for allegedly sticking the needles.
Magalhaes wanted to kill the child to spite his wife, with whom he fought a lot.
.
Conman poses as female model to lure men
A man posed as a gorgeous female model on the internet to trick male admirers into sending him gifts and money.
Texan Police said Justin Brown, 24, masqueraded as Californian Guess Jeans and Maxim swimwear model Bree Condon, 23, for two years.
In one of a string of fake online profiles on SeekingMillionaire.com, "the meeting place for wealthy and beautiful singles", Brown identified himself as "Bree - just looking for Mr. Right", with accompanying photos of the brunette cover girl.
He enticed rich suitors by sending them pictures of Bree's face photo-shopped onto nude photos of other women.
He also set up web chats and even had intimate telephone conversations with his contingent of male fans, using his "very feminine voice" to dupe them.
The admirers were charmed into sending gifts to "Bree", including an iPhone and a small dog.
One affluent doctor even handed over US$15,000 ($16,438).
.
Woman slept with a 12-year-old boy nearly 200 times
A woman gave a 12-year-old boy a pair of sneakers to mark the 100th time they had slept together.
Now Angela Sullivan, of Middlesbrough in the UK, is facing a jail term after being found guilty of getting the boy drunk, seducing him and sleeping with him almost 200 times during a 10-month affair.
Sullivan admitted to 10 charges of causing or inciting a child to engage in sexual activity.
Sullivan told the Teesside Crown Court she sent her son to stay with his grandparents while she had sex with the boy in her own home.
She kept a diary about their affair, marking each sex session with a star - 191 of them.
The affair reportedly was uncovered after the boy began boasting to friends in internet chat rooms.
.
Human waste pours on to road
Tons of human excrement spilled across a road in Worcestershire after a sewage tanker crashed into the central reservation.
A white tanker crashed on the A46 near Twyford Garage in Evesham at about 0800 GMT, West Mercia Police said.
The vehicle, which was carrying about 44 tons of liquid waste, shed its entire load.
Motorists were advised to avoid the area, or keep their windows up because of the smell.
Both lanes were closed at Twyford Island towards Salford Priors and one lane closed in the opposite direction, at one point.
Police said the clean-up took several hours.
.
Posted by The Man at 1/20/2010 No comments: 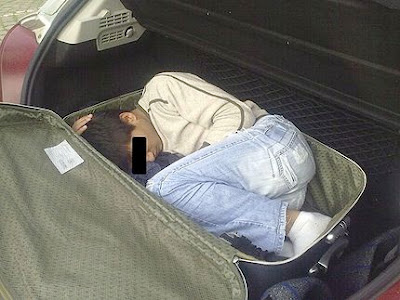 It was a tough case, but nosy border cops in Bari, Italy, cracked open a human trafficking ring when one of the hiding illegal immigrants sneezed.
Police stopped this Peugeot 207 as it tried to leave the port and were just about to give it the all clear when one of the immigrants sneezed and gave away his hiding spot - inside a suitcase.
Two other youngsters were found stashed in the rear seats, which had been gutted of all their stuffing to make room for them.
.
Posted by The Man at 1/20/2010 No comments: 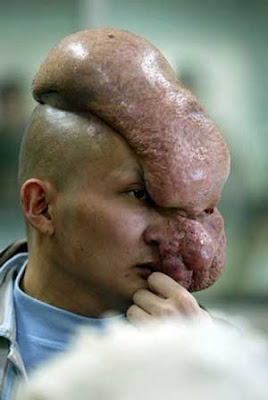 An astonishing real life Elephant Man has been studied by surgeons after he emerged at a clinic in rural central China.
Yang Huiming, 28, suffers from a rare condition with huge tumors covering his face, including one huge central 'trunk' over his nose and up his forehead.
The growths began with a small bean-sized lump on his left eyelid as a toddler and quickly spread all over his face, say medics at Military 304 Hospital, in Beijing.
Surgeons believe the growths are caused by a rare deformity of Yang's skull which causes facial tissue to constantly grow over diseased fibers protruding from the skull.
Now they plan to remove the damaged part of Yang's skull and replace it with an alloy plate to halt the constant regrowth of fatty tumors.
"All I want is to look normal. I hope and pray this will work," said Yang.
.
Posted by The Man at 1/20/2010 No comments: 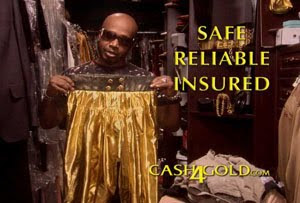 Cash4Gold, the company that targets poor, desperate late-night TV watchers with endorsements by equally cash-strapped celebrities, is a scam! Okay, maybe you already knew that. But unless you're one of the poor people who dialed their 1-800 number, you don't know how they fleece customers—4 Cash!
The company's advertisements—which feature washed-up rapper MC Hammer—lure in customers with handfuls of money, but in reality pay only 11 to 29 percent of an item's market value, compared with pawn shops that pay 35 to 70 percent. One victim, church organist Frank Poindexter, received 15 cents for jewelry that had been appraised at $200. "I looked at the check and thought it was a mistake," Poindexter said "When I called them, they actually accused me of scamming them." After customers send in their jewelry for appraisal, Cash4Gold gives them only twelve days to get their goods back if they feel they've been low-balled. Sometimes when they protest they're told the jewelry has already been thrown in the furnace.
.
Posted by The Man at 1/20/2010 1 comment: