Man arrested for smuggling snakes and geckos in his pants 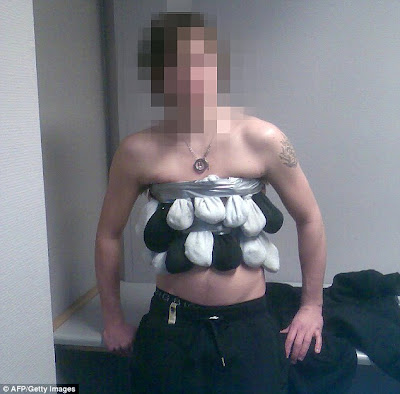 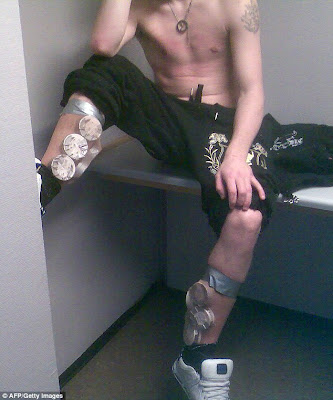 Pilots Were Working on Their Laptops
2 Northwest Airlines pilots have told federal investigators that they were going over schedules using their laptops, in violation of company policy, while their plane overflew their Minneapolis destination by 150 miles, the NTSB said Monday. (Oct. 26)
.
.
Posted by The Man at 10/27/2009 1 comment:

Dealer finally gave up after 16 days
A drug dealer who refused to go to the toilet for 16 days to avoid producing the evidence that would convict him has been jailed for 52 months today.
Damien Ankrah, aged 28, was arrested on July 13th on suspicion of transporting heroin by placing the drugs in condoms and placing them inside himself.
Police became even more suspicious when he refused food or drink in his cell at Pembroke Dock police station, west Wales.
An officer was stationed full time outside his cell door and police used special legislation to keep him in custody beyond the normal time limits.
Ankrah began to accept drinks only but after local magistrates granted a further extension of time for his detention on July 17th he started to eat small quantities of food.
But he kept his legs crossed until July 29th, when he finally came clean and produced five bags of heroin.
.
One-legged man held after one shoe goes missing from store
Police say a one-legged suspect was caught after only one shoe went missing in a store in Belgium.
An amputee was an immediate suspect when a store attendant found one shoe missing from a shop in the western Belgian town of Maldegem.
Police spokesman Rik Decraemer said Monday authorities were alerted and quickly found the man who fit the description by shopkeepers. The shoe was also recovered.
The suspect, a Russian asylum seeker, faces possible charges and was handed over to judicial authorities.
.
Panty raid at Victoria's Secret Store
$8,000 in undies stolen from Victoria's Secret
Five hundred pairs of panties were reported stolen Thursday from the Victoria's Secret store in the Bell Tower Shops.
Employee Michelle Birch told deputies that at 5:30 p.m. two women came into the store with a child.
According to reports, the child went into the beauty section and opened several drawers, possibly to distract Birch while the mother continued to shop.
During that time, a man and woman also came into the store, and employee Tonia Wiesner helped them.
Wiesner told police the man stood uncomfortably close to her face and asked several questions in Spanish.
Birch noticed the two women had left the store, and then discovered 500 pairs of panties, each valued at $16.00, were missing from trays.
.
Woman has been in mortuary cold storage for 30 years.
A nurse who fell to her death at a party in Saudi Arabia will finally be given a funeral more than 30 years after she died.
Helen Smith was 23 when she fell from the balcony of a block of flats in the city of Jeddah in May, 1979.
Her father Ron, who is 83 and now in poor health, has finally given the go-ahead for her to be cremated after three decades of campaigning for a public inquiry into the circumstances surrounding her death.
Helen and fellow partygoer Johannes Otten - a Dutch sea captain - were both killed in the fall and police concluded they had been having sex when they lost their footing.
Mr. Smith, a retired police officer, always denied this and refused to accept the open verdict at her inquest.
.
Police Looking for Dogs That Rip Bumper off Car
Animal control officers in Fort Smith, Ark. were searching for two pit bulls that ripped apart the front of a car with their teeth.
Police said a 911 call led them to a home where they found two pit bulls. There were one on top of the car and one on the hood," said resident Ima Jean Vervack.
Police chased the dogs and searched nearby neighborhoods.
Vervack said it's shocking to look at the front bumper of her car, which was torn apart by the dogs' teeth.
"The whole front is torn up. The fender is torn off. There was blood where they cut their mouth trying to tear this stuff off," Vervack said.
Vervack said police rushed to her home just before 4 a.m. when her daughter called 911.
.
Posted by The Man at 10/27/2009 No comments: