Polish police are questioning a woman suspected of fattening up dogs and slaughtering them to sell the lard as a health supplement, reports say.
The police said 28 well-fed dogs, including St Bernards and puppies, were found in cages on a farm, along with bottles of lard, AFP news agency said.
An animal welfare group tipped off the police after buying some lard at the farm near Czestochowa, southern Poland.
It said some dogs "were overfed to the point of no longer being able to walk".
The For Animals group's undercover inspector, Renata Mizera, said the farmer had stressed the health benefits of the lard and told her that she herself added a spoonful to her daughter's evening meal, Agence France-Presse reported.
"Half a litre of fat was being sold for 37 euros ($53, £31)," said Ms Mizera.
The police are checking whether the lard - which was found in bottles in a refrigerator at the woman's farm - comes from dogs.
The 37-year-old farmer could face up to two years in jail for animal cruelty and distributing an unsafe substance, Poland's TVN24 reported.
The dogs are being cared for by the For Animals group, which is looking for new homes for them.
.
Posted by The Man at 8/08/2009 No comments:

You're In Control (Urine Control)

In order to allow both men and women to participate in the demonstration, we created a customized game controller, consisting of a nylon belt, a formed acrylic pelvic plate, water bottles, tubing, and a flexible garden hose nozzle. The controller is worn around the waist and the bottles are gripped and squeezed to pressurize a stream of water 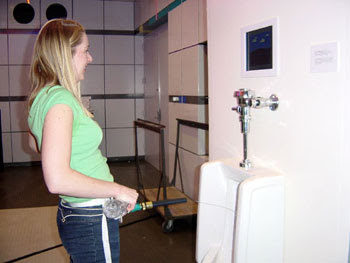 We mounted a urinal to a freestanding sheetrock partition, and affixed a flat-panel LCD screen to a frame above the urinal. Since the flush-valve was not functional, we routed sensor wires from the urinal basin through the chrome-plated plumbing fixtures to the circuit board and computer behind the wall. 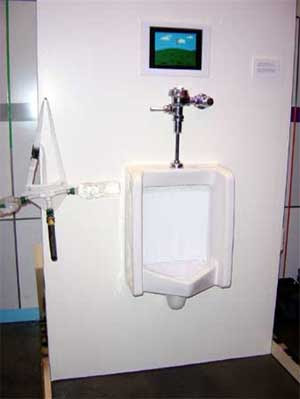 Cocaine Found In Billy Mays' System
An autopsy report says cocaine contributed to the death of TV pitchman Billy Mays.
The 50-year bearded TV personality died of a heart attack in his sleep. His wife found him unresponsive June 28 at their condo in Tampa, Fla.
A release from the Hillsborough County medical examiner's office Friday said Mays had last used cocaine days before his death.
The report said that although Mays died from heart disease, cocaine use was a contributing cause of death.
.
Man Blames Cat For Child Porn On Computer
A Jensen Beach man was arrested on charges of child pornography Thursday.
The Martin County Sheriff's Office said Keith Griffin told investigators that his cat often jumped on the keyboard when he was out of the room and that strange things would be on the screen when he returned.
Investigators said he then admitted that he enjoyed looking at a variety of pornographic images.
More than 1,000 images of child pornography were found, investigators said.
Griffin was at the Martin County Jail on $250,000 bond.
.
Children played with dead body for 11 days
Children spent 11 days playing with the remains of what they thought was a crocodile in a creek before a parent discovered that the body was human, it emerged yesterday.
The children had picked up parts of the badly decomposed body in Stanmore Bay on the Whangaparaoa Peninsula, just north of Auckland.
Police are investigating whether the remains are those of Alanah Brough, 39, missing since January.
.
Twitter hackers targeting blogger
The outage that knocked Twitter offline for hours has been traced to an attack on a lone blogger in the former Soviet republic of Georgia.
Twitter crashed because of a denial-of-service attack, in which hackers command scores of computers toward a single site at the same time to prevent legitimate traffic from getting through.
.
Posted by The Man at 8/08/2009 1 comment: