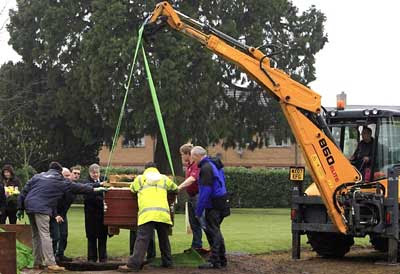 728 pound man buried with the help of backhoe.
It took a backhoe and a team of cemetery workers to lay John Jeffrey to rest. His grave, at 4ft 8in by 7ft 8in, was twice the normal size.
Dave Butler, cemetery grounds man, said the grave was "twice as big" as any other he had heard of.
Mr Jeffrey was buried rather than cremated because his body was too wide, he added.
Funeral workers struggled for four hours to maneuver his reinforced casket into position.
Everyone did their best to give the big man a dignified send-off. But there was no one to shed a tear for the 29-year-old who had no known relatives. Just a solitary Good Samaritan - believed to be a local care worker-turned up to pay his respects at the £800 council-paid funeral in Taunton, Somerset.
Posted by The Man at 3/16/2008 No comments:

Hundreds of bottles of booze seized 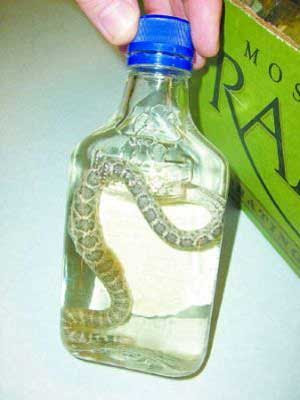 Texas Alcoholic Beverage Commission agents seized 411 bottles of illegal hooch at Bayou Bob's Brazos River Rattlesnake Ranch in Palo Pinto County.
But it wasn't your typical variety of moonshine: the bottles of vodka also contained 10-inch rattlesnakes. "We learned that these contain aphrodisiac properties and that some people believe having a venomous animal creates hallucinations."
Posted by The Man at 3/16/2008 No comments:

Why you don't point… 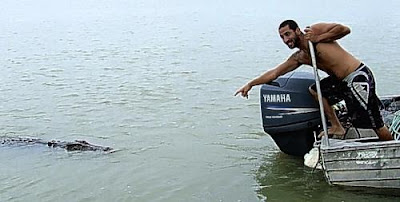 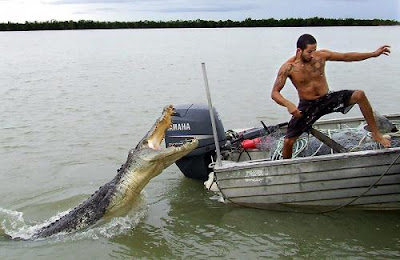 #1 Rule When Playing With Fire 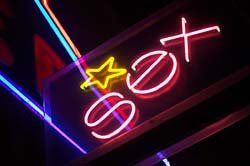 He had to swallow some pride to report this crime.
When a Waukegan man returned home from work last week and realized he had been burglarized, there were some pretty typical items taken.

A DVD player, a few dozen DVDs -- nothing out of the ordinary, except that the DVDs were far from family-friendly.

The 39-year-old, who lives in an apartment in the 800 block of Berwick Boulevard, told police thieves took nearly 40 pornographic DVDs. The collection included 30 assorted titles and a 10-disc box set of ethnic-specific movies. Thieves also took a $200 DVD player.
Posted by The Man at 3/16/2008 No comments:

HONOLULU — The pilots of an inter-island flight from Honolulu to Hilo failed to respond to air traffic controllers 11 times as it overshot its destination while flying at an altitude of 21,000 feet.
According to air traffic control tapes, a controller monitoring airspace around Maui repeatedly tried to raise the two pilots on Feb. 13. They are being investigated for possibly falling asleep during the 214-mile flight.
The controller was initially unable to contact the pilots of Flight 1002 when she tried to call them about 15 minutes after the plane left Honolulu.
Finally, about 32 minutes into the flight, the captain responded, and the controller said: "Air shuttle 1002, guys, I've been trying to contact you for the last 90 to 100 miles. I understand you've passed Hilo, I'm going to turn you back to the northeast bound to get you back to the Hilo airport. Is there some kind of emergency situation going on?"
"Uh no emergency situation," the captain said.
Posted by The Man at 3/16/2008 No comments:

Amerigo Gas Station employee James Willman says at least once a day he gets an earful from motorists who pull into Gorda, which is about 35 miles north of Cambria on scenic Highway 1.

Willman says "they say all kinds of stuff - 'You ought to be shot,' or 'Where's your mask?'"

Many potential customers slow down, look at the price, then keep on rolling.

Station manager Leo Flores says the high price reflects the cost of bringing fuel to the town's remote location as well as its reliance on a diesel generator for all of its power.
Posted by The Man at 3/16/2008 No comments:

This guy figure out how to make exercising more enjoyable 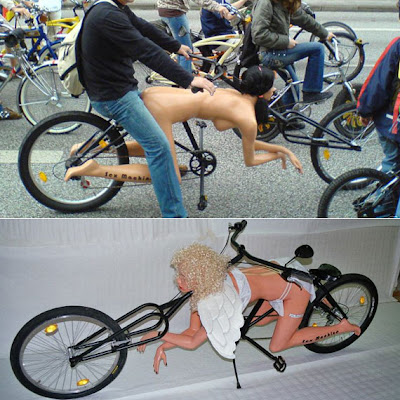 Bid for your own bitchcruiser on eBay.
You have until March 16th to open the auction for $2,303.81...you know, if your fantasy is riding around on the most tacky bicycles ever invented before being pulled to the ground and kicked in the testicles, repeatedly.
Posted by The Man at 3/16/2008 No comments:

Post worker wore stolen G-string
A Dorset postman was caught wearing stolen women's underwear after his bosses became suspicious that packages were going missing, a court heard.
Matthew Furness, 35, from Weymouth, admitted two charges of stealing postal packages belonging to Royal Mail, on 1 October and 6 December last year.
Furness was caught wearing a woman's thong taken from a parcel, after a sting operation by officials.
.
Mexican Cops Find 36 Bodies in Border City Backyard
MEXICO CITY — Mexican officials said Saturday that 36 bodies were found buried in the backyard of a house in a city across the border from El Paso, Texas, and they believe that number represents the final tally.
Mexican federal agents began digging behind a Ciudad Juarez house allegedly used by the Juarez drug cartel two weeks ago after receiving an anonymous tip, officials said.
In the raid, investigators found 3,740 pounds of marijuana in the house. They initially found six dismembered bodies, but as excavations preceded the tally rose.
.
Parents Face Charges After Leaving Daughter in Truck Outside Bar
An 8-year-old girl was locked in a truck for at least two hours while her parents were drinking inside a Florida bar.
Edward Wise Davis, 37, and Lisa Brazell Davis, 36, face charges of child neglect after police say they found the girl locked in the truck, the TV station reports.
Police responded to Siggy's American Bar after receiving a report of the girl in the truck. Officers say Edward Davis, after driving to the bar with his daughter to meet his wife, told the girl to stay in the vehicle and "keep the doors locked and not to let anyone in the truck."
The child told police that she was scared that someone might kidnap her.
Posted by The Man at 3/16/2008 No comments: